Ultimate cantaloupe and other NSO ideas 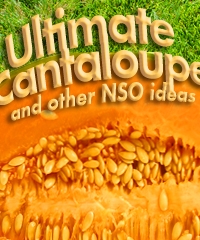 What do you remember from your first week on campus? Starting college can be a mix of freedom and limitations, new friends and loneliness, excitement and fear. For newcomers in the midst of this initial tumult, your InterVarsity group can extend hospitality and a personal welcome on your campus. Need ideas? Here are examples of what others have done to spark interest and promote their group in the first crucial week of the semester.

Ultimate cantaloupe
Picture Ultimate Frisbee® played with a cantaloupe. Yeah, it’s messy, but not too extreme for the students at the University of Wisconsin – Eau Claire. They use a large playing field and about 12-15 cantaloupes. After a few tosses (and drops), the cantaloupe breaks into pieces, but they just pick up the biggest piece and continue. Soon the juice is flying, hands are sticky and chunks of melon are spread around the field — good, clean (okay, not really) fun!

This game is as entertaining to watch as it is to play. They’ve had up to forty students playing in two games at the same time, with at least that many curious spectators cheering from the sidelines. “Our best conversations are with the people who come to watch, since the players usually head for the showers right after the game,” said staff worker Amanda Eisner. “As we sit together, we get to know them and invite them to other InterVarsity events. It’s one of the highlights of our NSO season!”

Snowball fight in August
Homemade ice cream in eight different flavors isn’t the only annual NSO attraction at the University of New Mexico. They also sponsor a snowball fight that attracts over 100 students. The flour-in-pantyhose snowballs quickly get people actively involved with each other.

To make the snowballs, they buy cheap knee-high stockings and cut them in half. They tie a knot in one end, fill it with a cup of flour and then tie another knot in the other end. The snowballs last for about thirty minutes. They make about 50-60 with a ten-pound bag of flour. The stockings that don’t get torn are saved and reused for the snowball fight the following year.

Mega sundae
Our best NSO event comes from a great partnership with the local Ben & Jerry’s at Davidson College (NC). The manager, Karen, drives her truck up to the large green commons area in front of the largest

academic building on campus. We attach our banner to the side of her truck and play music from her speakers. We purchase everything from Ben & Jerry’s: the blocks of ice cream, toppings, syrup, whipped cream, the works. The Mega Sundae container is a baby pool lined with a disposable plastic tablecloth. The students who are first to arrive help create it. We use InterVarsity stadium cups ordered from the IV Store to scoop out helpings and our guests have a freebie to take home. We hold this event on the first Friday of classes in the late afternoon and have about 100 students who come to get some ice cream. —Carrie Reinhardt

Want a Bible?
In the student union, dining halls and academic buildings, more than 1,000 students filled out a survey about their spiritual interests at the University at Buffalo (NY). One question asked if they would like a free Bible. “We were surprised that so many students were excited to get a Bible,” said staff member Brian Tofflemire. “We looked at their survey when they turned it in and gave them one right away.” They had so many requests that the InterVarsity group ran out of Bibles and had to get more from a local church, later delivering them personally to the students that wanted one. The chapter prayed that these students would read them and encounter God through their new Bibles.

Coming to America
International students who step off the plane in Portland (OR) are often greeted by American volunteers who drive them to their campus housing or homestay hosts. “It takes a multitude of drivers and a lot of organization to schedule the right driver with the right pickup,” said Greg Steward, InterVarsity staff with International Student Ministries. It’s a great opportunity to welcome them and extend hospitality.” The ISM group also works with a local church to coordinate a huge give-away event so that newly-arrived international students and scholars will have the household goods they need to get settled.

One simple question
We had a great two weeks of outreach at the University of Nevada, Reno. We participated in the dorm move-in by helping freshmen move boxes, clothes and refrigerators into their rooms. We gave out s’mores at a food festival on the campus quad and also hosted a welcome barbeque. As we met people, we started asking them a simple question: “What’s your spiritual background?” It became as easy as asking about one’s major. It was a simple segue into learning where people were at spiritually and inviting them to our events. —Sarah Burke

Choose your own college adventure …
Do you remember the “choose your own adventure” stories? During the first week of school at Bakersfield College (CA) we hosted an evangelistic outreach event that gave students the time to consider their

college adventure. We asked them to name experiences they hoped would be a part of the next four years. Answers ranged from romance to travel. Next we asked if they saw faith and spirituality as a part of their college adventure. This gave us opportunities to share the gospel and information about InterVarsity. —Joseph Litto

Ladies party
Our new chapter at the University of Oklahoma sponsored a special Ladies Party at a local church with a coffeehouse-style lobby. First we gathered names of all the women who might be interested in InterVarsity and also used Facebook and personal contacts to invite people to our event. The men in the group came early to help set up the room and decorate it with flowers and candles. They enjoyed helping and the women felt honored. We served ice cream sundaes and had a table with brochures, pictures and information about InterVarsity at OU. We gave away journals as small gifts for the women. Our featured speaker shared her vision of using the college years to grow spiritually. Music played as students took a few minutes to journal some thoughts and prayers about the coming year. Some of them shared what they wrote and we prayed for each other and the year ahead. —Chris Goree

Freshman Fear Factor
Our goal at Texas Tech was to engage new students in a fun way but also address some legitimate concerns or fears they might have about living in a new place, such as temptation, loneliness, insecurity, etc. So, like the “Fear Factor” TV series, we created a game show format with contestants competing in three challenges. When new students arrived, they filled out information cards and we drew names for the participants in each challenge.

It was easy for students to relate to these entertaining challenges of difficult roommates, questionable dorm food and odd local weather. Between each challenge, InterVarsity students briefly shared some challenges they’ve faced in college and how God helped them. The night ended with the presentation of the gospel message and an invitation for new students to let God into their hearts so that they might not have to face the world’s “fear factors” alone! —Lisa Atkins

Wet and wild
We created a slip-and-slide for an outreach at Florida Tech with a fifty-foot piece of plastic, several hoses and the largest hill on campus. One student served as a DJ and others handed out fliers and invited people from the dorms to come by. Before this, we had an unplanned event when Tropical Storm Fay rolled through our state. This sparked a great impromptu cookout. During a break, we explained our group and what we were about and passed out fliers describing our small groups. — Ron Lorusso

Google Docs and follow-up
A successful NSO was not the only goal for students at the University of Virginia. They also set a goal to improve their follow-up efforts by personally visiting students who showed interest in InterVarsity so that no first-years slipped through the cracks. To help them be more faithful and organized, they created a Google Docs spreadsheet that could be accessed by all of the leaders. Whenever they met a new student, the information went into the spreadsheet. Throughout September they organized dorm visits in shifts. Once a shift was done, the leaders immediately updated the online spreadsheet for an accurate and up-to-date picture of who had been visited and who still needed a visit.

“It was exhausting work for a fellowship our size, but it was so encouraging,” reported staff member Derek Mondeau. “Students felt like God was with them as they embodied his hospitality on campus.” InterVarsity students followed up with about 200 of the nearly 250 first-years they met. Others told them that no other ministry came close to matching their personal follow-up. They’re excited to see how the culture of hospitality and inclusion shapes the future ministry of the group.

There’s more …
Get ready for NSO with more ideas from previous years. And don’t forget the stuff! Order your NSO t-shirts and other promotional items from the InterVarsity Store.