How can I respond when someone I know is dabbling in the occult? 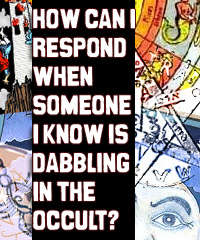 You’re out having coffee with a friend. She opens a newspaper that someone has left behind and, after a brief perusal of the day’s headlines, she immediately flips to the horoscope. Something on your face must have betrayed you because she says, “What?”

What, indeed? Why should it bother you if your friend wants to read her horoscope? It’s not like she’s holding a seance.

“Why do you read that thing?” you say.

Great, now you’ve irritated her. What you want to say is, “It’s not silly; the Bible has plenty to say about the occult, and it’s not good. And you’re not silly either — you’re looking for spiritual guidance, something we were all designed to seek. There’s just a better way to do it.”

Practically speaking, “occult” is a notoriously loose term, essentially a catch-all category employed by scholars of comparative religion, a spiritual clearinghouse for everything from horoscopes and crystals to Ouija boards and satanism. What occult practices have in common is a claim to hidden knowledge beyond anything revealed by the world’s religions. The occult is different from the Bible, the Koran or the Eightfold Path which all claim, “Behold, here is revealed spiritual truth for all people!”

In contrast, the occult is a spiritual shell game played by people claiming to have found secret short cuts to enlightenment. The promise of quick and easy answers — the spiritual equivalent of winning the lottery to solve your economic woes — is very tempting. Even more attractive about the occult is the possibility of power without rules or consequences — a genie in a bottle that says, “Yes, Master,” instead of a God who says, “Worship me.”

What does the Bible say about the occult? We may be tempted to quote from passages that recommend a quick execution for practitioners of the occult, such as Exodus 22:18, Leviticus 20:27 or Deuteronomy 18:9-13. But this may not be the most helpful response.

Other Bible passages have a more reasoned approach, such as Isaiah 8:19: “When someone tells you to consult mediums and spiritists, who whisper and mutter, should not a people inquire of their God? Why consult the dead on behalf of the living?”

We often think of the occult as dangerous or evil because we are (possibly) contacting demonic spirits. This isn’t surprising — as with everything else, we think the passages about the occult are all about us.

Ultimately, however, the heart of the issue is unfaithfulness to God. He cares about our well-being, but his own holiness and glory are first priority. He will not have his people spreading his glory around.

How you broach the subject with your friend depends partly on where this person is spiritually. If your friend is Christian, it’s appropriate to discuss this in biblical terms — scripture is categorical on the subject of the occult. If your friend isn’t a Christian, it’s not appropriate to start quoting Leviticus — if they don’t share your worldview already, talking about stoning diviners will definitely creep them out. The term “witch-hunt,” after all, is used today to describe a situation where ignorant, irrational people become hysterical and falsely accuse innocent people. So how can we avoid hysteria on the one hand and blithe dismissal on the other? We talked to several people about this Good Question. Here are a few ideas we received for responding to your friend:

Spirituality isn’t a game or a fad. If your friend is simply “playing around,” encourage them to be thoughtful of their spiritual life. Whether it’s taking communion in church or partaking in a seance, spiritual matters aren’t a joke.

Here are a couple of books to consider reading:

Powers of Darkness: Principalities & Powers in Paul’s Letters covers magic and occult practices in biblical times and how Jesus’ and Paul’s teachings apply to today.

A Guide to New Religious Movements looks at several movements in addition to New Age and Neopagan practices.