The Pope and the quest for the historical Jesus (part 2) 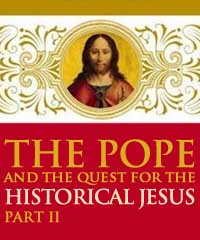 Pope Benedict XVI’s Jesus of Nazareth is the first part of a projected two volume work on the life of Jesus. Benedict has striven to write not as a Roman Catholic thinker but as a Christian thinker. The subject he is addressing, the identity of Jesus of Nazareth, closely concerns all of Christianity. The first volume carries the reader up to Peter’s confession and the transfiguration. Benedict published the first half of the work independently because its topic is of grave importance to him: “As I do not know how much time or strength I am still to be given, I have decided to publish the first ten chapters” (xxiv).

Benedict begins by removing his papal mitre. “It goes without saying that this book is in no way an exercise of the magisterium, but is solely an expression of my personal search ‘for the face of the Lord’ (cf. Ps 27:8). Everyone is free, then, to contradict me. I would only ask my readers for that initial goodwill without which there can be no understanding” (xxiii-xxiv). In this spirit, he signs his foreword, cover, and title page with his birth name above his papal name. This step has startled many reviewers, though it should not. It is not just humility; it is good tactics. In Benedict’s view, the greatest contemporary threat to Christianity is the historical Jesus movement (see Part 1). The vast number of books (inspiring innumerable newspaper and magazine articles) dedicated to the task of unearthing the human Jesus from gospel stories threatens to erase the uniqueness of Jesus’ life and message. If the Pope were to counter this movement with an authoritative utterance, his statements might well be ignored (at least by Protestants and by the academy). Addressing the subject as a personal quest of Joseph Ratzinger’s requires readers to engage his ideas, not his ecclesiastical position.

Scholars of the contemporary historical Jesus movement stress the Jewishness of Jesus: most, if not all, of his authentic teachings can also be found in pre-Christian Jewish sources. The Jesus of history was “not yet the Christ,” let alone the God of Christianity. Early Christians, they claim, fashioned a belief in Jesus as messiah and God, even though Jesus did not claim either title. Benedict, in contrast, sets out to demonstrate that Jesus himself claimed to be both God and messiah. In other words, he argues that Christianity does, in fact, originate with Jesus.

Along the way, Benedict appears willing to engage historical Jesus scholarship on its own terms, using the methodology of historical criticism. “[M]y intention is not to counter modern exegesis; rather I write with profound gratitude for all that it has given and continues to give to us.” He even agrees that the canonical Gospels evolved over time: “the new Testament writings display a many-layered struggle to come to grips with the figure of Jesus.” Nonetheless, he admits that his approach goes beyond that of historical criticism; it “requires faith” (xxiii). In this vein, Benedict deviates from the established practice of historical criticism in that he accepts the historicity of Jesus’ miracles and treats the Gospel of John as a historical source whose reliability equals that of the Synoptic Gospels. Moreover, he overlooks many passages that historical Jesus scholars point to as particularly telling, for example when Jesus refused to accept the title, “Good Master.” “Why do you call me good? No one is good but God alone” (Mark 10:18). Benedict’s goal, however, is not to defend every one of his opinions, nor is it to counter every historical argument that denies the divinity of Jesus. His goal is to reveal the shortcomings of such an approach, and to make an equally plausible case for Jesus as God incarnate.

To make his case, Benedict adopts different strategies. At times, the book reads like a detailed commentary. Benedict fleshes out numerous scriptural passages, doggedly following the voice of Jesus that echoes through the texts. It is nearly impossible to grasp Benedict’s argument without a Bible near at hand. Whether or not, in the end, readers agree that he has apprehended the message of the historical Jesus, he has clearly heard and articulated the summons of the gospel writers, all of whom relentlessly press readers to a choice: “is Jesus who he claims to be, or is he not?”

At other times, Jesus of Nazareth reads like a running conversation with Jesus scholars of the past and present. Benedict critiques most modern interpretations of Jesus as christologically deficient. Jesus the moralist, Jesus the social revolutionary, Jesus the sage — all these portraits of Jesus are, according to Benedict, in some sense, correct. Where they fail is that they stress the message without regard for the medium — they put the cart before the horse. In an effort to stress Jesus’ social message, “historical Jesus” scholars have undercut the only basis for real social action and human rights, namely belief in God. This is the gospel of the incarnation. The gospel is “not just informative speech, but performative speech — not just the imparting of information, but action, efficacious power that enters into the world to save and transform” (47).

This is Benedict’s thesis. There can be no justice, no social order, no moral progress apart from a recognition of God. Benedict puts it this way:

The issue is the primacy of God. The issue is acknowledging that he is a reality, that he is the reality without which nothing else can be good. History cannot be detached from God and then run smoothly on purely material lines. If man’s heart is not good, then nothing else can turn out good either. And the goodness of the human heart can ultimately come only from the One who is goodness, who is the Good itself (34-35).

Moreover, the church cannot incarnate the gospel for all, cannot “save and transform,” unless it recognizes and emulates the one who first did so. Presenting humanity with the proper teaching about Jesus is, according to Benedict, the greatest kindness and highest service the church can offer. Justice and mercy are indissolubly bound with gospel. Speaking of the parable of the good Samaritan, Benedict has this to say about Jesus’ demand “you shall love your neighbor as yourself”:

The topical relevance of the parable is evident. When we transpose it into the dimensions of globalized society, we see how the peoples of Africa, lying robbed and plundered, matter to us, then we see how deeply they are our neighbors; that our lifestyle, the history in which we are involved, has plundered them and continues to do so. This is true above all in the sense that we have wounded their souls. Instead of giving them God, the God who has come close to us in Christ, which would have integrated and brought to completion all that is precious and great in their own traditions, we have given them the cynicism of a world without God in which all that counts is power and profit, a world that destroys moral standards so that corruption and unscrupulous will-to-power are taken for granted. And that applies not only to Africa. We do of course have material aid to offer, and we have to examine our own way of life. But we always give too little when we just give material things (198-99).

Because he is addressing a broad audience, Benedict makes very few affirmations with which only Roman Catholics can agree. As stated in the introduction, Benedict has striven to write not as a Roman Catholic thinker but as a Christian thinker. The subject he is addressing, the identity of Jesus of Nazareth, closely concerns all of Christianity. Regarding the identity of Jesus, Robert Funk, one of the founders of the Jesus Seminar, argued, “we must begin to sell a product that has some utilitarian value to someone … or which at least appears to have utilitarian value to someone.” In Benedict’s view, the product that Funk and scholars like him have produced is soul-destroying. He has chosen not to repudiate it, but to compete with it in the marketplace of ideas. His hope is that Christian readers will find the Jesus of the Gospels more compelling, more satisfying, and more believable than the “historical” Jesus. Bendict is confident that this Jesus, his Jesus, can inspire Christians to mimic the mission of the man from Nazareth, “to bring good news to the poor … to proclaim release to the captives … to let the oppressed go free” (Luke 4:18; Isa 61:1-2).