The Pope and the quest for the historical Jesus (part 1) 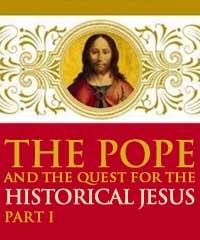 Over the last several years, an increasing number of popular magazines, newspapers and television shows have run stories centered on the question, “Who was the historical Jesus?” Now Pope Benedict XVI has written a new book, Jesus of Nazareth. The following is part one of an article by Dr. William Tooman, assistant professor of Religious Studies at Edgewood College in Madison, Wisconsin.

Very seldom, in the twenty years since the Jesus Seminar emerged, has a conservative Catholic or Protestant entered the media debate to challenge the results of popular scholarship on the biography of Jesus. But now the most prominent of Christians, Pope Benedict XVI, has weighed in on the debate. With his new book, Jesus of Nazareth, he hopes to abate the erosion of faith that has been the legacy of the “quest for the historical Jesus.” In this article I’ll introduce the core issues related to the debate surrounding the historical Jesus. In part two, I will review the Pope’s book and explore its implications for the church, the academy and the ongoing popular debate about the real Jesus of history.

I was first introduced to this debate as an undergraduate in a course on the early Christian Gospels. Since the 18th century, I learned, battalions of scholars, suspecting the motives and verisimilitude of the gospel writers, have sought to exhume the real Jesus of history from the pages of the New Testament. When I recall the professor and the class, I can still evoke my initial feelings of intrigue. What prompted them? What did they conclude, and what was to be gained from such an inquiry?

Before long, however, my infatuation faded to disinterest. The pictures of Jesus that emerged from this tributary of gospel scholarship — whether apocalyptic teacher, itinerant rabbi, or peasant cynic — did not capture my imagination half so well as the gospel writers had with their arresting and distinctive portraits of Jesus. In effect, I concluded that nothing was to be gained here, at least for me.

My casually dismissive attitude was further encouraged through a decade of graduate school, the sensationalism of the Jesus Seminar and a parade of popular books by pseudo-scholars more interested in scandal than enlightenment. This comfortable detachment was brought up short when I left the university and began to teach.

I vividly (and painfully) remember making an unthinking comment to a student in a graduate class regarding one of the founders of the Jesus Seminar, an author of several biographies of Jesus. Not only did the student object, but the entire class (except for one lonely, bewildered conservative Catholic) vociferously defended not only the person I dismissed out of hand but the entire stream of popular historical Jesus scholarship. I was stunned. How could my students accept the results of this cardboard scholarship as pure gospel?

Something profound had happened while I was off learning how to be a scholar. Discussion of the most central of Christian topics had been removed from the rigor and discipline of the academy and from the reverence and reflection of the church and had been relocated to the sphere of pop-literature and media “debates.” It is the popular, sensationalist variety of Jesus scholarship that is winning the day and defining who Jesus really was for a whole generation of mainline Christians, both Protestant and Catholic.

A primer on the quest for the historical Jesus

The so-called quest for the historical Jesus begins with the assumption that the gospel accounts are freighted with later Christian traditions and beliefs. In effect, the gospel writers, intentionally or not, put words in Jesus’ mouth and credited him with events, both miraculous and ordinary, which reflect the traditions of primitive Christianity but bear little or no resemblance to the life and teachings of the real historical Jesus. Thus, while historical Jesus studies begin from the New Testament, the New Testament message about Jesus is not the point. The Gospels must be stripped of anachronisms and other inaccuracies to get at the kernel of authentic historical fact lying within. Only then can we see the unvarnished life of Jesus of Nazareth, according to these scholars.

The quest for the historical Jesus began in 1778 when a German professor, Gotthold Lessing, published a work by Samuel Reimarus that questioned the historical accuracy of the canonical Gospels (Reimarus had been too cautious to publish his ideas on the subject, fearing a Christian backlash). In it, Reimarus argued that the real historical Jesus was not a religious revolutionary, and certainly never intended to launch a new religion. Jesus was a political revolutionary, one seeking to liberate Judaism from foreign oppression. Following the death of Jesus, Reimarus claimed, the disciples hid the body and proclaimed the resurrection. They were the authors and founders of a new “Jesus religion,” which later came to be called Christianity. The Gospels, inspired by the teachings of the disciples, re-envisioned Jesus as a miracle-worker, messiah and god.

The first quest took a significant turn when David Friedrich Strauss published his multi-volume work, The Life of Jesus Critically Examined (1835-36). Strauss cast doubt on the gospel stories, pointing out and examining contradictions between them. Armed with this evidence that the Gospels were not entirely factual, he moved on to the topic of miracles. For Strauss, Jesus’ miracles were not best understood as natural events, but as early Christian myths. Myth-making is a central phenomenon in every religion and Christianity, said Strauss, is no exception. Shrouding Jesus in stories of the miraculous established his unique identity as a deified messiah and elevated his movement beyond the political sphere and into the religious.

The most prominent figure of the First Quest was Albert Schweitzer. Before Schweitzer, most so-called “first questers” saw Jesus as a moral teacher and quasi-universalist who promoted a belief in the fatherhood of God and brotherhood of all humankind. In his 1906 volume, The Quest for the Historical Jesus, Schweitzer criticized the First Quest and reinvested Jesus with a radical religious message. Schweitzer argued that it was First Quest scholars, even more than early Christians, who had recreated Jesus in their own image. The Jesus that emerged from the First Quest, he said, looked suspiciously like an advocate of 19th century Protestant liberalism. Schweitzer viewed Jesus as an apocalyptic prophet who vicariously sacrificed himself to initiate the Kingdom of God on earth (a sacrifice in vain, as it turned out). He also argued that there was simply not enough authentic biographical information in the Gospels, especially regarding Jesus’ self-consciousness, to paint an accurate picture of the historical Jesus.

From 1906 until the post-World War II era the quest for the historical Jesus was abandoned. The most authoritative scholar of the day, Rudolph Bultmann, believed (like Schweitzer) that it was impossible to extract the historical Jesus from the Gospels. As there were no other reliable sources on the life of Jesus, the quest was in vain. For Bultmann, and most New Testament German scholars of the day, this was not a significant concern. Christianity, he argued, is based on faith, and faith does not require historical proof. It does not matter, he argued, what the historical Jesus was like; what matters (theologically speaking) is what Christianity claims about him.

But Bultmann himself sowed the seeds of the so-called “New Quest” for the historical Jesus. Bultmann was an early practitioner of form criticism, which attempted to identify whether sections of New Testament books were originally written or uttered for use in preaching, liturgy, correspondence, oral disputation or whatever. Using form criticism, and comparing the Gospels with one another, scholars attempted to reconstruct which of Jesus’ sayings could most reliably have originated with him, and what their exact wording was. This type of research goes on today, unabated.

The Third Quest for the historical Jesus originated in the 1980s, fueled by the discovery and publication of countless new documents (like the Dead Sea Scrolls), new archeological excavations, and a clearer understanding of the relationship between early Christianity and emergent Rabbinic Judaism. All this new information has encouraged third questers to emphasize the Jewishness of Jesus. In general, scholars now view Jesus as a wisdom teacher or social activist. He was neither a political nor religious revolutionary; he was an itinerant Jewish rabbi like many others, albeit a highly charismatic one.

The most revolutionary part of the Third Quest, however, is its willingness to present its arguments in the realm of popular culture, not just in the academy. The most famous example of this, of course, is the Jesus Seminar (founded in 1985 by Robert Funk and John Dominic Crossan), in which a panel of experts voted on the historical accuracy of Jesus’ utterances by casting colored beads into boxes. The Seminar held these votes publicly, and had a clever, “media-friendly” interpretation for each color:

The “votes” were then tabulated and the results published in 1993 as a polychrome gospel text entitled The Five Gospels, having the words of Jesus printed in red, pink, grey or black.

The Jesus Seminar is by no means idle today. Over two-hundred New Testament scholars belong to the group, and they have utilized the media in savvy ways to get their message out. Every major news network and news magazine has run stories on the subject. In 1988 they sold the rights to produce a movie of their Jesus to Paul Verhoeven (director of Robocop, Basic Instinct and Showgirls), though nothing has come of the project so far. This quest for the limelight is at the heart of the Jesus Seminar’s agenda. As Funk put it in 1985, “If we are to survive as scholars in the Humanities, as well as theologians, we must quit the academic closet. And we must begin to sell a product that has some utilitarian value to someone … or which at least appears to have utilitarian value to someone.”

That is why the Pope is weighing in on this debate: to reaffirm the validity and trustworthiness of the biography of Jesus as presented in the Gospels. In part two of this article, I will review his book, Jesus of Nazareth.