Forty Days of Prayer at the University of Arizona 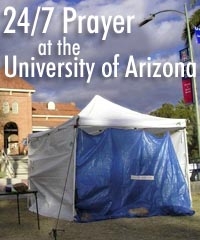 We pitched our little white tent on the mall in the middle of our campus at the University of Arizona. People stared. But we were united in a common mission — 40 days of non-stop prayer for our campus. Surprisingly, all the fellowship groups eagerly got on board, but this was not your typical “annual unity event.”

Most of our school’s Christian groups have little interaction with each other. But that changed this year. From February 12 to March 19, we prayed 24/7, except for one week at spring break. As we met in the prayer tent, leaders and members of different fellowships came together — united under Jesus’ simple vision of prayer for those in need around us. We wanted to bring together the Christian groups on campus and create a space for the UA community to meet God and Jesus.

The campus newspaper, the Arizona Daily Wildcat, printed a story with headlines: “Students pray non-stop.” The story quoted a guy in our chapter. “I guess we feel like there’s a lot at this campus that really needs to be prayed for,” said Andy Hall, a freshman majoring in English affiliated with the Inter-Varsity Christian Fellowship. “I feel like this is kind of a place of darkness and that the power of God can help. There are a lot of people who are hurting; there are a lot of people who are kind of lost.”

Jenna was praying with others from three different clubs when one student, Oneida, started praying specifically for Young Life. She prayed for leaders to rise up and for effective ministry. “Without me saying a word to her about our needs as a ministry, she was able to pray for exactly what we needed,” says Jenna. “God is awesome!”

For security reasons, we were required to take down the tent each evening and store it until the next morning. The Catholic Newman Center generously offered a room from 10:00 p.m. to 7:00 a.m. each night so that prayer could continue. I was amazed to see how students in each group eagerly joined in by hosting the prayer times and doing setup for the tent each day.

From the beginning, we fought to keep the vision as simple as we could: unity in the body of Christ. This grew out of Urbana06 and our study in Ephesians which says, “In him the whole building is joined together and rises to become a holy temple in the Lord” (Ephesians 2:21). We chose to chase after unity in the body, which glorifies God, rather than chasing an agenda.

By stripping the event of an agenda, we were free to just create a space where people could go and meet Jesus. This rendered denominational differences irrelevant because almost every Christ-follower values prayer. Some groups would not have participated if we had focused on some of those differences (like evangelism, for example). We chose to eliminate those differences by never raising the question, and not engaging in lengthy theological discussions. Our priority was not a picture-perfect prayer event, but simply coming together to glorify God. We tried not to complicate the event past that.

There were many who passed by and interacted with the tent. The campus police (UAPD) came in one night and posted a list of prayer requests for us. A student who was there commented, “People believe in us and are relying on us for prayer.” Some of the local churches also wanted to join us to pray for the body of Christ in Tucson, expanding on the vision.

One of my friends, Rachel, has been a part of our InterVarsity circle of friends for the past two years but did not know Jesus. She entered into a relationship with the Lord recently. To celebrate, she invited everyone from our InterVarsity chapter to her “birthday.” I was overjoyed! It was awesome time of fellowship, prayer and worship as we praised Jesus that another one of his children had committed to follow him. It was so encouraging to our fellowship — many of us have been praying for Rachel for a long time.

Now our tent has been taken down, but our praying has not stopped. We believe this is just the beginning of what God will be doing. Throughout our prayer time, we have been very encouraged by stories of 24/7 from other campuses, especially Arizona State University which had a similar event last fall. We also received invaluable resources by the team from 24-7 Prayer USA. After 40 days of uninterrupted prayer and worship, the Christians at our school are even more united and passionate about seeing the kingdom of God come on our campus.