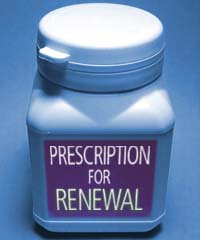 You’re an active and busy student. Is it okay to take time for personal rest and renewal? Have you ever decided you’ll take some time out, only to find yourself in a crowded and chaotic “Disney World” instead? You’re not alone, and there is hope for rest and refreshment.

Even before it began, I knew that my Christmas vacation was not going to be restful. My extended family had gathered at my mom’s place in Florida. I needed some space, but we did the tourist thing, ending up on the 29th of December at Walt Disney World. By the end of the day, there were 122,000 people jammed into the Magic Kingdom alone. I was a tired introvert; I really didn’t need the crowds.

My story isn’t unique. Many of us in leadership could use rest and renewal. Mark (not his real name) is one example that will hit close to home for many students. Mark was an active new member of the InterVarsity chapter at a large midwestern university. He joined in eagerly to help implement the chapter plans for the year. Because of his enthusiasm and initiative, he was identified as a potential chapter leader just a few weeks into the semester.

By spring he was appointed to be the next chapter president. Planning for the next fall went well. When school started in late summer, Mark found himself incredibly busy. By mid-semester he was tired and experiencing migraine headaches. Early in the second semester he was hinting that he should turn his responsibilities over to someone else.

What happened? “Not only did the joy of participating in the chapter’s life turn into hard work, I realized I had agreed to take on more than I could handle intellectually, emotionally and spiritually,” he said. “School was a struggle for me because I read slowly. I was a new Christian at the time, too. I wanted to grow personally, but I had to give up a lot of personal time to help lead the chapter. Instead of getting help with the work, and instead of taking time out for my own refreshment, I ended up way beyond my limits.”

Have you ever felt like Mark? When people are overloaded, emotionally drained and exhausted, they can become candidates for “burnout.” Actually, few of us ever reach that stage in its ultimate form, but many of us do face “brownout,” a term used in the power industry to describe too little voltage available during peak demand. The lights dim, the TV picture shrinks and the air conditioner fails. It’s not a power blackout, but it can wreak havoc with electrical equipment. We’re not much different. We lose power too, drained to a point where we’re just not excited about our schoolwork, our worship, our studies and our relationships. We tend to pull back, and we don’t have the desire to keep risking and growing. Our emotional energy is gone, and we can barely make it to class or to work. If we keep up the pace, our equipment starts to fall apart.

I know what brownout is like. For several years, I served as a rehabilitative nurse in a large urban medical center. My specialty was children’s spinal cord injuries. Our medical team faced highly intense and emotional situations every day. One day, I noticed a Chicago Tribune feature listing different professions according to stress factors. Nursing was rated second to defusing bombs.

Why ministry takes a toll

Now I work with Graduate & Faculty Ministries, and I’m finding that people doing the work of leadership and ministry — including student leaders — are especially prone to brownout. Why? Every job has demands and frustrations, but ministry has some unique stresses.

How does God respond to Elijah? Instead of giving him more work, God sends an angel with one assignment only: to feed Elijah and to let him sleep for an extended time.

Even as we labor to love our campuses and to present the gospel of Jesus Christ, we are engaged in exhausting spiritual battle. Somehow, even though God does the real work in unseen places, we as his people are still engaged in battle and still experience a loss of energy. God wants us to be restored.

Symptoms of brownout in chapter leaders (or your staff worker) might include losing the vision for their group or their role in it, lacking the energy to visit new members, pulling back from social opportunities or not bothering to get to know people in their classes or on their dorm floors. God has built us with self-protective mechanisms, and people facing “brownout” often become focused on one thing in order to survive. Like Mark (described at the beginning of this article), people at this stage are often wishing that there were ways to get out of their chapter duties and still save face. Brownout is not an unusual condition; most of us have felt this way at one time or another.

The problem with pulling back and just trying to survive is that it doesn’t deal with the real issues. The real issues lie in whether we are holding on to far too much responsibility and in whether we have places in our lives for renewal and rest. God made us to need rest. That’s why he gave us a Sabbath commandment: it’s a gift from him because he knows how he built our body, mind and spirit. And the busier we are, the more we need it. Being a Christian leader can be fulfilling and fun, but it also means trying to stay healthy as a whole person.

Are you recognizing any symptoms of brownout in your life? Do you need to build some regular patterns of renewal into your life? Before you clear your daily planner and head for the countryside, allow me just one more warning: watch out. You can’t make renewal happen. One of the pitfalls of our busyness is that when we recognize our need for rest, we’re tempted to make it just another item on our “to do” list. Instead, try to create an environment for renewal. Use some of the suggestions in the accompanying sidebar article, Ten R’s for renewal. It’s designed to get you started.

Remember, it’s God who renews us, not our activities. If you work too hard at being renewed, you won’t be. Your role is to establish the conditions: a changed pace, a changed place, a quiet or therapeutic activity and availability to God. Jesus can use these to minister to you. After all, he says, “Come to me, all you who are weary and burdened, and I will give you rest” (Matthew 11:28).