The Price of Life 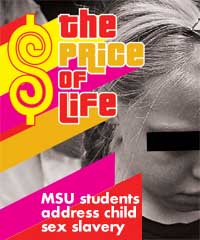 I was walking to my early morning class when the chalking at my feet stopped me cold. Scrawled on the sidewalk were these powerful words from Isaiah 1:17, “Learn to do right! Seek justice, encourage the oppressed. Defend the cause of the fatherless, plead the case of the widow.” It was a bold reminder of God’s heart for justice — a message we were about to take to our entire campus.

For months we had been preparing for the Price of Life, a week-long event to share the love and gospel of Christ with the campus community of Michigan State University. The leaders of many of the campus ministries partnered together to plan the event, including InterVarsity, International Justice Mission, Campus Crusade and others. Because of God’s passion for the oppressed, we wanted to bring attention to the issues God calls us to defend. The issue we chose to fight for was child sex slavery.

Even though we had been planning the Price of Life for months, I’ll admit that the chalking caught me by surprise. Suddenly I realized how soon it was coming and how much more there was to do: recruiting additional volunteers, painting the set, preparing an introduction for a speaker — my list went on.

But as I continued walking, I realized how many people would pass by that same verse on that crisp fall day. Their hearts might not know the love of Jesus or the love he wants Christians to share with others. They might know nothing about human trafficking or what can be done to help — and why Christians think it is so important to address the injustice. They might even despise the Christian community based on the harsh actions of those who misrepresent Christ. But whatever their case, they would be exposed to that ancient little verse. And if one small thing written on the sidewalk could affect the thoughts of students, God could use our group to make change.

During the week, “Proxe stations” (pronounced “proxy”) and demonstrations were set up throughout campus to initiate spiritual conversations and inspire people to take a stand against human trafficking. One volunteer, Brad Atchinson, saw firsthand how God worked in the heart of a student who visited his Proxe station in a dorm. He had already worked a 10-hour shift in the prayer tent but decided God was calling him to keep speaking about injustice, despite his tiredness. At the Proxe station, a student came by and talked with Brad about Jesus. They read parts of Romans together, and Brad prayed with him to accept Christ into his life.

“I was just glad to be a part of watching our sovereign God bring someone to know him,” said Brad.

Also throughout the week were small niche events to further build upon the issues and present the spiritual dynamics behind sin and injustice. Yang L. Chen from InterVarsity helped organize an outreach event specifically for Asian American students that featured a talent show. “We got some good talent to come perform and hear the gospel message,” Yang reports. He was pleased that there were 85-90 students who attended, even with bad weather and exams that week.

“I was amazed to see how God worked among us,” Yang adds. He says he will never forget the opportunity he had to work with many groups on campus — Christian and secular — to raise awareness of global sex trafficking and discuss solutions from a Christian perspective.

The main event that topped off the week was a game show styled after The Price is Right. We planned games, prizes, speakers and entertainment all related to the issue of child sex slavery. Our goal was to raise money for the International Justice Mission (IJM) in their fight against child sex slavery. But we were also passionate about clearly addressing the spiritual dynamics of injustice.

Two hours before the show, I started to feel overwhelmed and discouraged. Will the hearts of students be open to what we have to say, I wondered, or will they turn from it, closed to the message and God? I knew of many people who did not know Christ that would attend. I took time to pray, trusting that God would have his hand in our whole production and that he would work through us to gently share his love at MSU.

Not much later, the lights came on, the catchy The Price is Right music cued up, and our very own “Bob Barker” took the stage. The rest of the night ran smoothly. Rather than guessing the cost of their prizes, contestants guessed numbers and statistics about child sex slavery. Performances were given in honor of trafficked child victims. Videos played during the commercial breaks that documented cases of people that IJM has worked to free.

Then it was time for our main speaker, York Moore, to take the stage. For twenty-five minutes he gently spoke about how Jesus cared for all, including the little children of the Bible and the trafficked victims of today. He spoke of how God didn’t want evil things like sex trafficking occurring in the world. And he also spoke of how God can bring healing to broken lives through Jesus Christ. When an opportunity to accept Christ was given, I wondered about all the non-Christians in the room and whether God was tugging at their hearts, or if they were sitting there uncomfortably waiting for our event to end.

The event came to a close with the final “showcase showdown” winners guessing how much it costs IJM to continue their work of legal advocacy for trafficked victims. Before the winners could leave with their prizes, a check was presented to IJM to help them continue their work. We raised nearly $2,500 from ticket sales and donations from students. This amount was also matched by a private donor. Financially, it was a huge success.

The money raised, however, wasn’t the only exciting thing that resulted from the event. More than 100 volunteers signed up to get involved in the IJM chapter at MSU — a group that currently boasts only seven members. This influx of volunteers will greatly help the campus chapter plan events to raise funds and awareness for the work of IJM, including human rights abuses, legal advocacy, structural prevention and prayer.

God’s prevailing power to call his people home was also clearly shown when over one hundred people accepted Christ as their savior during the week-long event. Now, looking back, I am amazed that I ever doubted the impact this event could have on campus. Although many came together to put on this event, only one was truly at the head of it, and that was God. There was beauty in seeing peoples’ lives changed and inspired to do good as he calls us to do. This never could never have been pulled off by anyone else than the very one who was with us since the beginning.

I know that we will continue to see good things come from this campus as a result of the work the Lord was able to accomplish through the Price of Life.