Should we watch R-rated movies? 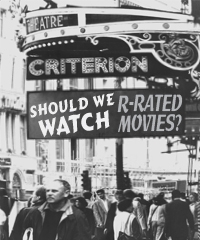 Maybe you’re a huge movie fan, enjoying everyone from Buster Keaton to Ingmar Bergman to Will Ferrell. You like going to movies with friends. Are there some films no one has any business viewing? Or is it up to each of us individually to search our hearts before we sit in that darkened theater? Is an R-rating a boundary you shouldn’t cross, or are there other moral yardsticks by which a film’s suitability can be measured?

Certainly we need to be judicious regarding what we see. Taking in large amounts of violence, sex, and general negativity isn’t good for anyone. Paul, Silas, and Timothy get right to the point in 1 Thessalonians 5: “Test everything. Hold on to the good. Avoid every kind of evil.” But like any other artistic medium, cinema is intrinsically neither sacred nor sinful. Despite many misguided attempts to pronounce authoritatively on the morality of cinema, it’s up to the individual to prayerfully consider what is appropriate for them.

Applying a strictly content-based litmus test to every film leads to absurd conclusions. This is, of course, exactly what the MPAA does (how else do you explain films as disparate as The Joy Luck Club and Saw II ending up with the same rating?) For instance, the overall level of violence is more or less the same in Saving Private Ryan and 300, but does any parent not have an opinion about which of those films they’d rather have their teenagers viewing? Intense holocaust drama The Grey Zone and shlocky horror flick Hostel both depict harrowing torture scenes, but their motivations couldn’t be more different: the former is about humanity and compassion in the midst of brutality, while the latter is cynical, pernicious pornography.

The same is true with nudity. Many people do not want to watch films that contain any nudity whatsoever, but here again our ratings system is unhelpful. When they slap an “R” rating on a film for nudity or sex, what does that mean? Does it mean a salacious skin-fest like American Pie? Or are they talking about a film like Nowhere In Africa, an excellent film that inexplicably received an R-rating for “some sexual content.” This “sexual content” consisted of one or two non-sexual scenes in which the European characters adopt the local practice of going topless. Of course, had the white women kept their shirts on, the film probably would have got a PG-13, but the issue of racism in our ratings system is a topic for another article. The bottom line is that the MPAA assumes a natural prurience of American audiences — if skin is shown, it must be dirty. No other national ratings board does this.

Foul language is the third issue for most viewers, generally bothering most people less than nudity but more than violence. Again, it all comes down to context. If soldiers are using the nasty language in the foxhole, we tend to understand. If junior high kids are saying it, it’s another matter entirely. Often, rampant profanity in a movie is a sign of lazy writing — a lack of original wit on the part of the writer can be covered up with the shock value of a lot of cursing.

So if a film’s moral fiber should not be judged solely by the number of f-bombs it drops or the square footage of skin it shows, what should we base our decisions on?

Every filmmaker has a purpose (even if it’s simply, “I will make a mindless lowest-common-denominator piece of junk in order to make as much money as possible”), and it needs to be considered. There’s plenty of R-rated junk out there that’s best avoided. But if we were to cut all R-rated films out of our movie diet, we would miss out on some of great art of the last century. They reveal profound truths about human nature (_American Beauty_, Unforgiven, Your Friends And Neighbors), help us understand complex social & political issues (_Syriana_, Traffic, Blood Diamond, Do The Right Thing), illuminate history (_Schindler’s List_, Letters from Iwo Jima, Hotel Rwanda), provide glimpses into other cultures (_The Joy Luck Club_, City of God, Babel), and provide emotional catharsis (_The Sweet Hereafter_, Moonlight Mile).

Every culture, every era, has had its “R-rated stories” — the historical books of the Old Testament, Greek myth, Shakespeare, Dostoevsky, Appalachian murder ballads, hip-hop music. Sharing and re-telling such stories is an important part of being human — it’s how we understand who and what we are. To paraphrase Philippians, storytelling is the act of working out our humanity with fear and trembling. The films we’ve just mentioned do this admirably.

Words — spoken or printed — are one thing, of course; an accurate visual depiction is another thing entirely. Modern films — IMAX-sized, CGI-enhanced, THX-ed to the point where you can feel your spleen vibrating — assault our emotions and senses in ways previous generations could never have imagined. Therefore it’s a good idea to be aware of what kind of experience you’re about to walk into. Ads are misleading, of course — who hasn’t been led astray by a glittering 30-second TV spot, only to discover too late that they’ve spent $7.50 for something far darker, or stupider, or more empty than what was promised? There are some excellent resources available to help you avoid trash. Read reviews on reputable critic sites like Roger Ebert, TV Guide, Metacritic, and Rotten Tomatoes. If you’re sensitive to specific content, or hitting the theaters with those who are (or young people), try screenit.com, a very literal-minded and detailed site that will spell out all the potentially offensive moments in the film.