The prodigal daughter: Rachel Getting Married 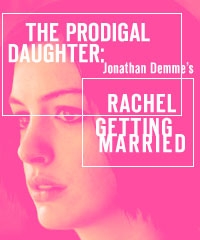 In America, family dysfunction is ubiquitous. If your immediate family has its act together, no doubt there’s a cousin, uncle or grandparent with serious issues. Rachel Getting Married accomplishes something I haven’t seen in the movies before. It manages to be honest about the pain and misery that family members inflict upon each other, while at the same time celebrating the family in such an open-hearted way I caught myself wearing one of those inadvertent movie grins.

The characters in Jonathan Demme’s film (two families, along with myriad friends, gathered at one home for a combination wedding-family reunion) know how to have a good time. Yes, that time involves the essential nuts and bolts of any good family bash: dancing, eating, drinking, singing and storytelling, interspersed with drowsy respites in the La-Z-Boy. But the film also miraculously captures that intangible quality many of us will recognize: the glow of being around loved ones we see too rarely, the high of having all of them together at once, the reluctance of anyone to go to bed because the first to do so signals the beginning of the end, the bittersweet brevity of the whole enterprise.

At the nucleus of this celebration are two sisters, Kym and Rachel. As you will no doubt have surmised, Rachel is getting married, to a strong, quiet, considerate man who measures out his words like gold dust. Rachel is the good sister. She has worked diligently for her Ph.D. in psychology, has been a dutiful daughter, and has stoically put up with her sister’s self-destructive tendencies for years. Like the rest of the family, she has orbited around Kym and her crises like a satellite. Only the mother, Abby (Debra Winger, in a performance that should have garnered an Oscar nomination), seems to have extricated herself from Kym’s gravitational pull, and she’s emotionally repressed to the point of catatonia. When she finally confronts her true feelings about Kym, it’s like watching a blister explode.

Kym shows up at the family house fresh from rehab, cigarette dangling from her mouth and several chips balancing on her shoulder. Rachel is genuinely excited to see Kym, and for a while they are fifteen again, lost in their sister-world, giggling and reminiscing. But their conversation grows more and more brittle as the past intrudes. Rachel’s friends flash tight-lipped smiles at Kym, making snide little comments about her stay in rehab. Kym discovers that she is not the maid of honor, and though her hurt is understandable, so is Rachel’s decision. For all her protestations, Kym has given Rachel every reason to distrust her; she’s as likely to show up drunk or high at the wedding as she is to not show up at all. For her part, Kym believes that her family refuses to let her move on, grow up or atone for the past. Yes, she’s burned every bridge to the ground, but she’d like to think that relational reconstruction is possible, and everyone deserves a second chance (or third, or fourth), right?

The father, Paul, welcomes back Kym with wide open arms, doting on her in a way that immediately brings to mind the story of the prodigal son. Of course, the father in the bible story is every bit as “prodigal” as the wayward boy, lavishing his love and attention in a way that the sensible older brother deplores. Paul handles Kym as though she were a Tiffany lamp. His care and concern stem partly from Kym’s self-destructive tendencies, but also from the fact that a third child — a son — was lost at an early age. The death of the brother hangs always over the weekend like a little black cloud, ready at any moment to dowse everything in sorrow. About mid-way through the film, we discover Kym’s connection to her brother’s death, and suddenly all of the slightly shrill laughter and strained smiles are thrown into sharp relief. The family scab is ripped off again, and ten years of anger and resentment come pouring out.

But one of the beautiful things about this film is that Demme is not content to leave his characters broken. Just as the camera has stuck close to these people through the songs and stories and watched quietly as they loose their pain, so it is not willing to part from them until they have reached some kind of resolution. It’s as though Demme, like us, are weary of dysfunction and brokenness, and longs for right relationships. By the end of Rachel Getting Married, as evening dissolves into a slightly surreal reception (complete with Brazilian dancers and eighties alternate-rock star Robyn Hitchcock [!] fronting some sort of high school garage band), we witness Kym and Rachel share a tender slow-dance embrace, the stress and anger leaching out of them like toxins. This isn’t a naive film, and the characters know that a decade of unresolved family problems will not be erased in a weekend. But neither will they go backward. The prodigal has returned home, and this time has been embraced by everyone.

One last note: Rachel Getting Married is not in a hurry. This is a film that strolls, lingering here and there to observe impromptu quartets and ramshackle talent shows. So many movies are in such a blasted hurry, rushing from plot point to plot point, not so much edited as minced; it’s as though the filmmakers are afraid we’ll fall asleep or opt for conversation with our fellow movie-goers. Jonathan Demme’s new film has no such concerns, but is supremely confident in its characters and the audience’s intelligence.

Rachel Getting Married is now available on DVD.