The compassionate cinema of Ramin Bahrani 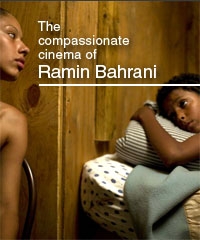 North Carolina-born Ramin Bahrani’s documentary-style dramas are insightful and incisive portraits of Americans struggling to survive. If students on your campus are concerned with economic and social justice, they’ll find his films to be essential viewing.

Pakistani immigrant Ahmad gets up at 4 a.m. and pulls his food cart through the streets of lower Manhattan to provide coffee and bagels to wealthy investment bankers. They know his face and first name, and greet him with a smile, but you get the sense they consider him part of the city scenery; he may as well have materialized there ex nihilo, a man without a past. Then one day, a customer recognizes him as a one-time pop star back in the old country.

Thus begins Bahrani’s first great film, Man Push Cart, and what follows is not a Horatio Alger tale (poor, struggling man realizes the American dream through hard work and ingenuity). Ramin Bahrani’s films are compassionate, realistic snapshots of lives lived on the margins. As a storyteller, Bahrani shows a rare empathy for his characters; as a filmmaker, he employs an improvisational, realistic visual style that immerses the viewer in the economic shadowlands of New York City. The tenuous state of today’s economy only serves to make his films more resonant.

If Bahrani’s affection for his characters is palpable, his hope for their future is scant. Ahmad struggles along, selling coffee (and bootleg DVDs on the side). He is scraping his money together with dreams of a successful business and possible romance within reach. Ahmad is a good man, and the audience feels a tremendous amount of sympathy for his plight, though somehow — and this is important — without ever feeling sorry for him (there is a difference).

In Chop Shop, twelve-year-old Alejandro is even more ambitious: initially homeless, he finds refuge in the Queens neighborhood known as the “Iron Triangle,” an industrial wasteland chock-a-block with autobody repair shops. Between doing noxious paint jobs and shilling for his boss’s garage, he hopes to save enough money to purchase his own food van, thereby lifting himself and his 16-year-old sister Isamar out of poverty.

As Ahmad and Alejandro pursue their entrepreneurial dreams of self-determination, they are threatened by unscrupulous businessmen and opportunistic predators, ready to exploit their naiveté. Because of this, Chop Shop and Man Push Cart are sometimes heartbreaking to watch, but how could these films be otherwise? Bahrani is no sentimentalist, and while he respects his characters, he harbors no romantic notions of poverty. Ahmad, Alejandro and Isamar do not inhabit a movie world, but rather the real one. Hope and kindness are not absent, but they are often hard to find.

Bahrani’s films are rooted in the Italian neo-realist films of the 1940s and 50s, particularly Vittorio De Sica’s classic The Bicycle Thief. Those films were snapshots of a country laboring to dig itself out of crushing poverty and the post-WWII rubble; Chop Shop and Man Push Cart portray a nation that is leaving more and more people behind in its no-holds-barred pursuit of mammon. At a time when our popular culture is making a god of conspicuous consumption and flaunted wealth via countless television shows, these films are a sobering view from the bottom of the economic ladder — and ask us to stop, and think, and consider, and love.

The CEOs of America’s “big three” automakers recently flew to Washington in their private jets to beg Congress for a handout. The cable news channels debate endlessly about whether or not we should have bailed out Wall Street and grind their teeth at stories of $500,000 executive “retreats.” Bahrani’s films are essential viewing for keeping America’s economic crisis in perspective. The economy has been a national talking point for the last six months, but people like Ahmad and Alejandro have been struggling for a lot longer than that, and will continue to live on the fringe after the rest of us have moved on.

After the diploma: one graduate's journey
Graduation is both joyous and scary. A graduate shares what he’s learned on his journey from college to career.

The Best of Urbana 09
Highlights of the most-watched videos from the Urbana 09 student missions conference.

Lunch money inequity at Urbana 09
Studying issues of poverty wasn’t just an academic exercise for students who applied what they learned over lunch.

A spring break trip to New Orleans brings dramatic changes to students on the journey together and the residents they served.