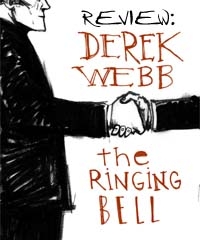 Can anything good come out of Nashville? Actually, yes… .

Derek Webb used to be with an outfit called Caedmon’s Call, a band I paid little attention to but many of my friends adored. Since leaving in 2003 he’s been very busy, releasing four solo albums, a live album, a concert DVD, and dual releases of early material (one acoustic, one remixed). One might be forgiven for wondering whether such a prolific output is an indicator of questionable quality control. It’s probably a solid body of work if Webb’s newest album, The Ringing Bell, is anything to go by — it’s excellent.

The album kicks off with “The End” and “The Very End”, two tracks that transition seamlessly, Abbey Road-style. The fact that this mini meta-song put me in mind of what is possibly the greatest album in rock ’n’ roll history sort of knocked me off-guard; for anyone who spends a lot of time listening to pop music, it was too obvious not to be on purpose. Part A (“The End”) mourns a seriously dysfunctional relationship, one in which “invisible knives” and “slow hate” are at the fore. The song’s great hooks (and this is an album chock full of them) make it easy not to notice the despair as Webb apparently declares the relationship dead (“this is the end … “). Suddenly on Part B (“The Very End”), everything’s new, as though Webb awoke from a nasty dream. Whether dream or reality, he’s determined not to let love get away from him as he effusively praises his significant other: “You are the anti-curse, death going in reverse.” Yeah, I know that sounds like he’s singing about Jesus, but previously he refers to this person as his “firefly,” which sounds less spiritual. Besides, as anyone who has ever felt rescued by a spouse can testify, those lyrics are no more melodramatic (though perhaps more poetic) than the ones we’ve uttered in moments of unfettered romantic adoration.

The entire album is deceptively sweet, with irresistible melodies masking lyrics of surprising depth. In fact, it’s not hard to see why Derek Webb is a controversial figure in the CCM world. “A Love That’s Stronger Than Our Fear” could be an indictment of our current administration’s queasy use of apocalyptic evangelical language to defend their human rights violations: “What would you do if someone would tell you the truth/But only if you torture them half to death?/Tell me since when do the means justify the ends/And you build the kingdom using the Devil’s tools/Can time be so short?” These words are delivered over a bed of rollicking power-pop that Matthew Sweet would be proud of. Or on “I Don’t Want To Fight,” in which Webb rejects confrontational evangelism while honestly confronting the impulses of his own heart: “I don’t want to be right anymore/I don’t want to be good/I don’t want to change your mind to feel it like I do.” And listen to “I For An I,” with its ambiguous war-oriented imagery — when Webb asks an invisible “you” to tell him “who Jesus would kill,” you can hear the label execs squirming in their blazers.

Thankfully, it’s not all heavy going, lyrics-wise. Webb made space for a couple of wistful love songs — a no-brainer for most artists, but kind of revolutionary for an industry that traditionally feels the need to shoe-horn the Lord into every song. Possibly my favorite song on the album is “I Wanna Marry You All Over Again,” a gleeful, giddy love letter to singer/songwriter spouse Sandra McCracken. Again, anyone who remembers the heady, electric joy of those early weeks and months of courtship will identify immediately: “I wanna accidentally stay all night/I wanna read the Bible and I wanna make out/I wanna marry you all over again/I wanna fall in love and say we’re just friends.” Complete with goofy handclaps, expect this song to be played at hip Christian weddings for years to come.

The best thing for me, though, about Webb’s music is … well, the music. It’s not blazingly original, but so what? Unlike so much of the junk coming out of the moribund CCM industry, this is refreshing, tasty pop music, made with care and real joy. Webb cribs liberally from The Beatles’ Revolver playbook to great effect, creating an album that stands up respectably next to work by similar artists like Josh Rouse, Joe Pernice, Rogue Wave, Eels, Wilco and Brendan Benson. The album’s not perfect: the strident “A Savior On Capitol Hill”, which sounds uncannily like a Jeff Tweedy outtake from the Mermaid Avenue sessions, finds Webb miscast as a political troubadour. Also, at thirty minutes, the album is criminally short. But these are minor quibbles. Derek Webb has given us a collection of thoughtful songs, wrapped in candyfloss hooks. Definitely recommended.

Not everyone appreciates Derek Webb’s approach. He recently graced the cover of Relevant Magazine, which included a tagline that posed the question, “Friend or Foe?” When you consider the typical output of the highly lucrative, tightly-controlled world of CCM, it’s borderline miraculous that Webb is allowed to make albums like this for his label (kudos to INO Records, by the way). No points for guessing who considers Webb a foe. But he’s a friend to open-minded fans of good music everywhere.