Do I have to say grace before I eat? 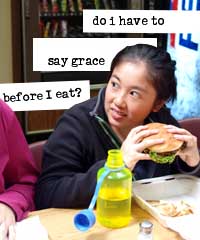 When Ricky Bobby says grace at dinner with his family in the movie Talladega Nights, he prays, “Dear baby Jesus, use your baby super-powers …” His wife interrupts to remind him that Jesus grew up to be a man with a beard. But Ricky Bobby likes the Christmas Jesus better, and continues to pray to “the eight-pound, six-ounce baby Jesus who listens to baby Einstein tapes …”

We don’t recommend saying grace like Ricky Bobby (actor Will Farrell), who thinks the grown-up Jesus is too scary. But if praying before meals is a tradition for you, what do you do when you’re sitting down to eat with your friends? To pray or not to pray? We asked around.

One person clearly remembers the awkwardness. She had a non-Christian friend who thought it was so bizarre that Christians (like her) would stop in mid-conversation, bow their heads, and then pop back up to continue the conversation. In her circles, it became a mark of being a “true Christian,” although now she thinks that’s probably not what Jesus intended, since it did alienate non-believing friends at meals. Oops.

Another person pointed out that it’s the attitude of thankfulness that is important, not the format or expression. If God provides everything we have, including the food we eat and the air we breathe, why not thank him? She says, “I’m much more grateful for my three meals a day after visiting Zambia and watching street children pick through garbage for anything to eat. When I pause to thank God for my food, I also pray for them. They are starving.”

Then there is the person who was clearly annoyed by the “have to” part of this question. He thanks God because he wants to. As a student, he always gave thanks to God, but it was not always visible. Sometimes he prayed silently with his eyes open. (He doesn’t think Christians should say grace in public as a vehicle of witness — “there are better ways to do that.”)

Why do we feel we “have to” say grace before meals? Will God be angry with us if we don’t? Do we pray from habit or a genuine attitude of thankfulness?

Sometimes trying to figure out the answer to this question about saying grace devolves into legalism. One person told us she actually had discussions with friends about what constituted a meal requiring prayer and what was just a snack. “One friend said that maybe you should pray if you were going to eat protein. But what if you were just going to eat a beef jerky for a snack? We knew the issue was kind of funny, but it was serious too — how can we incorporate our faith into our lives fully? What is the best way to be a witness on campus? When people think we are strange for saying grace in the cafeteria, is that ‘persecution’ or are we just being stupid?”

And then there is that self-conscious restaurant scene, with Christian friends who expect someone (please, not me!) to offer to pray because it’s the spiritual thing to do. But — oh, no! — the waitress is on her way to ask if we need ketchup! Does she have to wait for the “Amen”?

Setting a legalistic rule doesn’t get us very far when this issue has so little to do with our standing before God, and everything to do with humility and gratitude. Jesus scorned the Pharisees who made a big show of washing their hands but had no real love for God (Mark 7:5-6). Praying before eating is not a requirement, but rather a practice that helps us retain our perspective about who provides our food.

Deuteronomy 8:10 urges us to remember God as the provider for our food and well-being: “When you have eaten and are satisfied, praise the LORD your God for the good land he has given you.” The broader context of this passage refers to the Jews settling into the promised land over time, so this likely refers to an attitude of regular, community-wide thanksgiving, not necessarily the meal-by-meal prayer of an individual. Nonetheless, many Jews pray before and after meals because of this command. The early church continued the practice of giving thanks, and many North Americans continue to pray at mealtimes, although the habit is falling off.

What could that mealtime prayer include? Traditional prayers thank God, ask that the food will benefit our health and, in some countries, that the food would do no harm. David Bivin, founder and director of Jerusalem Perspective, reminds us that the focus is God, not the food: “The blessing can only be a blessing directed towards God. The blessing that was said in Yeshua’s time before one ate was praise and thanksgiving to God who so wondrously provides food for His children, to Him who ‘brings bread out of the earth.’ One does not bless the food, nor does one even ask God to bless the food. One blesses God who provides the food.”

So you certainly don’t have to say grace before you eat. But whether it’s a meal or a snack, pausing to thank God for the food you’re about to eat (or just ate) is one way to remember who’s providing for your life.