Skit with it: challenging your chapter through humor 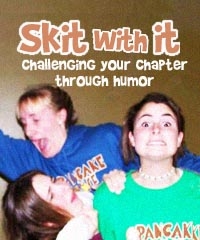 What do ninjas, The Oregon Trail and small groups have in common? Our chapter has used each of them in skits as a vehicle to communicate God’s love. Yes, skits are sometimes silly, witty or slightly outrageous, but they can speak truth to your campus group. Perhaps you’d like to create — or improve — a skit team for your InterVarsity group. Here’s what I learned from being on our chapter’s skit team at the College of William and Mary in Virginia.

Ahhh … skits! I can’t help smiling just thinking about them. Our chapter’s skit team performed every week at our large-group meeting. As a freshman, I became an avid fan. Gradually I got involved in the chapter as a small-group leader, then large-group coordinator — and nearly everything else! Let’s just say if there were InterVarsity action figures, I could be one. But I considered myself a very unlikely candidate for the skit team — until my fellow small-group members encouraged me to use the humor and creativity God gave me. When I joined the skit team, it turned into the most enjoyable and meaningful ministry of my four years in the chapter.

Skits add another dimension to any large group. They convey a message without banging people over the head, in a context the audience understands. This is why Jesus used parables 2,000 years ago. Back then, a story about lost sheep resonated in a farming community, but today a skit that speaks to university students might incorporate the ideas of popular movies, TV shows, Facebook, Chuck Norris (well, maybe that’s up for debate) or campus events.

As our generation becomes more consumed by visual culture, it’s imperative that our large-group meetings include more media, video or skits. Students encounter plenty of people who talk at them, from professors to parents to political candidates. Effective visuals allow student to observe and interpret for themselves.

A skit team is similar to a drama team in that both can deliver a serious message. Drama teams, though, often favor an emotion-grabbing plot, while skits usually opt for a comical storyline. This is not to say that skits can’t be serious. Our team held the theory that there would be times that call for serious skits (death on campus, tragic national events, etc.) and those subjects should be handled with care as they arise.

It’s easy to agree that good skits are entertaining and valuable, but what are some practical measures for developing an effective skit team?

Pray
The Lord wasn’t kidding when he gave us a biblical instruction that “in every situation, by prayer and petition, with thanksgiving, present your requests to God” (Philippians 4:6). It’s true that skits are often comical, but they serve a serious purpose in your chapter: to further the kingdom of God. Take time individually and together to seek God’s wisdom for the message he wants to convey when you perform.

Plan
My chapter’s skit team was effective because we put in the time. We did a skit every week, which may seem daunting, but it was a challenge we welcomed. We got together the day before our large-group meeting to have a brainstorming session for content, hoping to settle on a message and treatment (see below). We then met an hour before the actual large-group meeting to develop lines, blocking and other details.

This may seem too spontaneous and unrehearsed for some people, but it worked quite well for us. We thrived by mixing some improvisation into a healthy dose of pre-planning. The product was neither overly outrageous nor too polished. Granted, there were some tense moments in the practice room, but we were encouraged by our cooperation and focus.

Getting started on a skit is the hardest part, so let’s review the skit essentials of story development:

Content: message and treatment
Remember the message. What’s the point? If you don’t have a point, you don’t have a story. Along with this, make sure the message is Scripture-based so you’re not being blasphemous or misunderstood in front of a large group of people. When seeking a main message, consider the speaker’s topic, campus events, the chapter’s vision, or even what God is teaching you individually. Remember, often a skit doesn’t necessarily reveal a message that people don’t already know; a skit can simply convey it in an intriguing and creative manner. As you continue to develop the skit, use the message as an anchor so you don’t lose sight of the purpose.

Have fun with the treatment. Now for the fun part: figuring out how you’re going to tell your story and make your point. Here you let your imagination run wild and verbalize all your silly and random thoughts (you know, the ones that you usually hide from people so they don’t think you’re crazy). Create an open forum among skit team members where all ideas are welcome. In this context, there is no such thing as a stupid idea. In fact, many ideas which could seem stupid by themselves often lead to, or spark, inspiration for material used in the skit.

To quote a visionary philosopher and my favorite rapper, Dr. Seuss: “Think left and think right and think low and think high. Oh, the thinks you can think up if only you try!” We live in a spiritual world where spiritual truths can be found everywhere. That’s why you can make an effective skit out of events as simple as a fast-food drive-through — or as outrageous as cage-fighting for Jesus.

People
As for recruiting skit team members, they don’t need to have the talent of a Steve Carell or a Miley Cyrus (although if they do, get their autographs now). You need people who are willing, dedicated and not afraid to be in front of an audience. Five or six is an optimal number of people for a skit team. We never turned people away if more volunteered, but instead we rotated everyone in the weekly skit based on availability and the treatment chosen.

It’s vital that one person be named a leader. The leader isn’t necessarily the most talented person, but someone needs to be there to lay the smack down (or at least remind others of the message when ideas are flying). Skits are very much about group art. This means that everyone works together not only to decide on the final content, but also to develop lines and actions along the way. Because of its special dynamic, skit team proves to be an excellent way to get people (even freshmen) directly involved with the chapter.

Audience
Play to your audience (yeah, seems obvious doesn’t it?). But, if they don’t understand the skit, then all the other steps don’t matter. Your campus culture is unique so use it as a common ground. This being said, also beware of inside jokes and offensive remarks. You want a visitor to your group to be able to understand what’s going on and not be put off. Use of verbal and physical comedy, along with simple props and costumes, can enhance your skit. But realize mess-ups happen (this is not when you excommunicate a skit team member). Embrace it and don’t be afraid to laugh it off (it’s important for the audience to realize that even “cool” skit team members are human, too!).

Another warning: sometimes what you think is hilarious isn’t so hilarious to the audience. You may get a response like that time you tried to tell a knock-knock joke to the most popular kids in middle school, only to be engulfed by silence (or, insert your own humiliating and awkward moment). Anyway, don’t let unexpected laughter — or the absence of laughter — hinder a skit’s progression.

As you develop these basic components of a skit, they should never feel contrived or hinder the creativity and fun that is, in my opinion, the essence of a skit. As a team, we not only shared our lives and struggles with each other, but we also laughed about them together and encouraged each other. I loved this. By poking fun at ourselves and our many shortcomings as humans, we can convey the Lord’s power in our weakness.

There will always be critics of your skit, or even of your team. But the bottom line is: skits are an act of worship. God gave us creative gifts to serve him; he gifted us with humor to laugh and with minds to learn. In the end, it’s not about pleasing our audience, but offering ourselves as living sacrifices for his glory.

Read another story about students who wrote, performed and directed their own full-fledged play, ME, to raise issues and start conversations about personal identity, campus life and faith. The play may be used and adapted as needed to your particular campus.