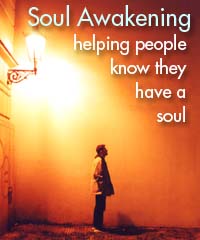 Students spend thousands of dollars and invest several years into preparation for adult life, but often neglect their spiritual development. While we want fellow students to explore their faith, getting students to even recognize that they have a soul worth nurturing is foundational. Geoff Gordon, an InterVarsity area director in Rhode Island, urges us to consider ways to help students connect to their spiritual nature and begin conversations about God.

In student ministry we try to perfect the art of reaching seekers — those who are looking for spiritual truth and are seeking God. Evangelism has been a front-burner issue in my New England region for almost a decade. Yet despite the countless hours given to planning and hosting seeker events, leading GIGs (Groups Investigating God), and equipping students in personal evangelism, the number of conversions in our region has actually fallen in recent years. Perhaps there are some fellowships that could be more intentional about their outreach, but on the whole, our low numbers are not due to a lack of evangelistic effort.

Innovation and creativity in evangelism will always be critical to the mission, but what we need is not so much a “new and improved” method for reaching seekers, but a more holistic way of thinking about our strategy. “Seeker events” serve people in the later stages of the conversion process. We need to think just as creatively about serving people in the earlier stages. Many of the students on our campuses — probably most — are not consciously seeking spiritual truth or experiences. They aren’t asking the questions that go with the answers we’d like to give them. More than a clever and relevant way to hear about Jesus, they first need to wake up to the fact that they have a soul.

Rick Richardson, in his book Evangelism Outside the Box (IVP), writes, “People need to be awakened to their need for God … to become anxious for their souls … to get more in touch with their spiritual needs and hungers and longings.” In his opinion, effective soul awakening efforts are the “greatest missing link in evangelism today.” Especially helpful is his use of Paul’s sermon at the Areopagus in Acts 17 as a model for soul awakening. Paul first comes into Athens and affirms the Athenians for the things in their culture worth affirming. Paul also uses their language and quotes their poets in presenting his message. And finally he connects their spiritual interest with a need that he understands and can help them meet. Richardson concludes that we can awaken souls when we “Turn to shared universal truth experiences, events in our culture, movies that have become part of our story as a culture. The key hump to get over is to recognize that God’s image is reflected in this culture and that there are many cultural elements or ‘handles’ we can use to awaken spiritual interest and connect that interest to God.”

Another model for soul awakening comes from George G. Hunter’s book, The Celtic Way of Evangelism. He uses the ministry of St. Patrick to the “barbarians” of Ireland as a template for reaching the “new barbarians” of the postmodern era. In contrast to the Roman way of evangelism, which required a conversion to Roman culture as well as to Christianity, Patrick reached the Celtic people by indigenizing the gospel to their culture. Instead of challenging their culture, he identified with it and affirmed it, building upon the good that was already there: “their religious aspirations, their sense of divinity’s closeness, their belief in afterlife, their love of creation.” In fact, Hunter compares Patrick’s approach to Jesus’ in coming not to destroy “the law” but to fulfill their religious traditions. The Celtic culture itself was full of symbols and stories that became convenient “vessels” for Patrick to use to convey spiritual understanding and experience.

A final model for soul awakening comes from Carl Ellis’s lecture series, “Discipleship as an Agricultural Process.” Ellis says, “There are reasons we have not been able to reach different cultures. We send 100 people out to reap a harvest but there has been no planting or soil prep.” In his model, after the important step of soil prep, which Ellis says is the practical application of God’s word to the felt needs and core issues of the people (i.e., loving them), comes cultural seeding. Cultural seeding is another way of describing soul awakening. As Ellis describes it, there are veiled truths in any culture and in nature that point people in the direction of God but stop short of revealing the full story. He calls this the “obscured schoolmaster.” Through reinterpretation, the use of the arts, and thoughtful dialogue, we can help people to “connect the dots between these veiled truths and biblical truth.”

Each of these three models shares some common principles. None of these is radically new and most of us probably operate this way intuitively, but it may be helpful to highlight them.

First, it is important to know, and more importantly to appreciate, the culture you are trying to reach. Paul spent time in Athens observing and becoming fluent in the Greeks’ ways. Patrick had lived in Ireland (as a slave) for many years before returning as a missionary after his escape. In order to awaken souls, we must be able to move beyond disdain and judgment of culture to understanding and affirmation of it. It involves going to where the people are instead of expecting them to come to us. It involves participation in the activities of the culture, not just knowledge about them. We need to be able to identify the good in a culture so that we can use those things to point people first toward the spiritual realm and then ultimately toward Jesus.

Second, it is important to understand the core issues and felt needs of the people you are trying to reach. This involves paying attention to what people are talking about “around the water cooler,” and listening for opportunities to engage. In cultures that are not specifically Christian, these longings play out in ways that we can use for soul awakening conversations. One example is found in all the sloganeering associated with the Red Sox march to the World Series in 2004. Many of the things people put on t-shirts and signs had direct associations to the spiritual realm: “Believe,” “Reverse the Curse,” “Miracles Do Happen,” “There is a God,” “Now I Can Die in Peace.” These slogans resonated with thousands of unchurched people because they line up with unconscious longings in their slumbering souls. The desire to believe in things that seem impossible is a good thing. The desire to reverse a curse is a good thing. People felt those things specifically about the Red Sox, but they had the capacity to feel those things because their souls long for it in a deeper way. What would it look like to ask questions that begin a conversation about the nature of belief or curses — questions that are asked not to lead the conversation around to Jesus, but because you are genuinely interested in what they think? There is potential for great pre-evangelistic conversations when, with the guidance of the Holy Spirit, we engage people with the issues they care about. With good questions and genuine interest, even things like baseball have the potential to awaken souls.

Third, it is important to identify with the people you are trying to reach. The reality is that people whose souls are asleep are a lot closer to us than they are far from God. Not only do we share the same core issues (among them, issues of identity, belonging and personal fulfillment), we also share the same felt needs, such as issues related to loneliness, stress and conflict. We are able to engage in conversation identifying fully with the needs and longings of our friends. We share the experience of what it is to be human in this world and so we are able to talk about these things from a place of equal footing.

Another important way to identify is to recognize — and to help our friends to recognize — that we share common experiences with God. Whether or not they realize it, God is at work in their lives. Paul in his speech to the Athenians says, “He is not served by human hands, as if he needed anything. Rather, he himself gives everyone life and breath and everything else. From one man he made all the nations, that they should inhabit the whole earth; and he marked out their appointed times in history and the boundaries of their lands. God did this so that they would seek him and perhaps reach out for him and find him, though he is not far from any one of us. ‘For in him we live and move and have our being’” (Acts 17:25-28) There is not a living person who has not experienced some measure of God’s grace and providence. At Boston University this fall, Mako Nagasawa gave a great example of a soul awakening talk entitled, “The God You’ve Already Experienced.” He talked about different ways that God speaks to us through feelings, thoughts and experiences — even when we don’t realize it’s him. At Boston College, which is 80 percent Catholic, we didn’t feel like the term “Groups Investigating God” (GIGs) accurately described what we wanted to see happen on campus. Nominal Catholics don’t need to “investigate” God. They need, like all of us, a deepening awareness of his work in their lives. So instead of calling them GIGs, we called them Spiritual Discussion Groups, “designed to deepen our awareness of God.”

Soul awakening is about opening people’s eyes to a spiritual world in which they already participate. The goal is to serve people by getting them to ask the deeper questions related to their souls. How we do that exactly will require ample experimentation, prayer, and risk. But if soul awakening is the biggest “missing link” in our evangelistic strategy, it will be well worth the effort. Ultimately, soul awakening is not likely to be “the silver bullet” to seeing an increase in conversions. There is no “silver bullet.” But with a more holistic approach incorporating, among other things, soul awakening, GIGs, contact evangelism, and seeker and harvest events we can hopefully begin to see more and more people moving toward God at whatever leg of the journey they find themselves.

In closing, here is an ancient Chinese poem quoted in The Celtic Way of Evangelism: