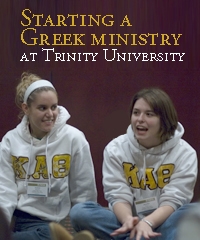 “Lord, what are you doing?” I cried out to God. No one showed up for our prayer meeting — again. Our fellowship group was falling apart, and I was discouraged. I longed to connect with other Greek Christians on my campus. How could we live for Jesus in our sororities and fraternities? It was too hard. All I could do was pray. But the Lord was doing more than I could see at the time… .

My student years at Trinity University in San Antonio, Texas, would not have been complete if I had not been a member of Sigma Theta Tau. My time in the sorority was filled with great friendships, growth in my leadership skills, fun events and lots of laughter.

I originally became a Sigma because I wanted to be a part of this social group of women, but God had additional plans. I began to realize the great opportunity I had to share my faith with my sorority sisters. Unfortunately, being a Christian in the Greek system was far more difficult than I realized, filled with many unexpected challenges.

Because of this, I longed to meet with other Christians in the Greek system so we could support each other in our faith. A friend of mine shared the same vision for Christians in different fraternities and sororities to meet together to share the excitements and hardships of being Greek and Christian. That semester, members from most of the houses on campus met weekly to pray and encourage each other to take steps of faith. This was the very beginning of Greek ministry at Trinity University — and it flourished.

The following semester my co-leader went abroad. That’s when our fledgling ministry began to fall apart. It wasn’t long before everyone stopped coming. I was heartbroken. So I did the only thing I could do — I began to pray. I went to our meeting place every week and prayed that God would create a passion for Greek ministry on Trinity’s campus and people would start coming again.

In the midst of deep discouragement, my InterVarsity staff worker recommended that I attend InterVarsity’s national Greek Conference. The conference was in Indianapolis, Indiana, a long way from my school, but I decided to go. I bought a ticket and boarded the plane alone, wondering what I had gotten myself into. Walking into Greek Conference, I came to the stark realization that not only was I the only one from my sorority and my campus, but I was the only one from the entire state of Texas!

God met me in big ways that weekend. The speaker challenged us to share our faith with the members of our houses — boldly living out our faith. I experienced amazing worship with over a thousand other Greek students. My small group was incredible, and I learned how to do Greek ministry effectively. The weekend was more than worth the investment.

By the time I was on the plane back to Texas, I was determined to bring five people from my school with me to the next conference. I now had a passion in my heart not just for fellowship, but also to see more people in the Greek system know Jesus and to help leaders in Greek houses start Bible studies. During the next year, three new Bible studies started! I met with the Bible study leaders to help encourage and train them.

For a year I had been praying for five people to go with me to Greek Conference, but God amazed me. Ten students went to the conference — and all of the funds for our travel were provided! Once again, it was a life-changing weekend for all of us. When the ten of us came back to campus, Greek ministry took off.

During my senior year we had our first large-group meeting. When it was time for Greek Conference there were twenty registrants, doubling our number. Once again God had acted. Before the conference, there were fifty people who gathered for a special send-off. I remember how exciting it was for us to have such a large group going to the conference. Even more wonderful was seeing how God worked in each of our lives that weekend.

Stephanie was one of the students who came with me to Greek Conference. She said, “It was so refreshing to gather and worship with Greek peers from all over the country. It made me realize that I am not alone in my struggle. Before attending the conference, my faith had taken a back seat to the demands of school and my social life. The weekend helped me focus on God’s never-ending love. It could not have come at a more pivotal time in my life.”

Starting Greek ministry at Trinity University and watching it grow has been such a blessing to me, but it was not without hardship. It was difficult not to lose faith when the Bible studies stopped meeting, or when leaders stopped coming to training, or when it seemed like I was the only one who wanted to go to Greek Conference. In those moments of doubt and discouragement, I learned to pray.

Before I graduated, I was considering a position as a Greek InterVarsity staff member. But I wasn’t sure I wanted to do this, even though I had seen God work in amazing ways. After dragging my feet, I attended a breakfast for potential staff at Greek Conference with the national director for Greek Ministry. He showed us a map of the United States with dots that represented every campus with Greek Ministry. The state of Texas was blank.

The Lord seemed to be saying to me that I could help do something about that.

Now I’m working as the first Greek InterVarsity staff in Texas — and loving it. I’m at the largest university, the University of Texas–Austin, a school with thousands of Greek students. I am eager to see them transformed, like Stephanie and I were, by realizing God’s never-ending love for them as Greeks in their sororities and fraternities. It’s my passion.