Why I stayed in the dorms 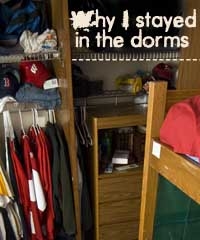 The shocked expression on the face of my freshman neighbor was nothing new. I’d seen it before — every time I told people it was my fourth year living in the dorms. “Why are you still here?” they’d ask in amazement. “I stayed to lead a Bible study,” I usually responded. That was true, but there was so much more … .

Most freshmen can’t wait to get out of the dorms and into their own apartment or other housing. I was tempted to move on as well, but the Lord showed me that the dorms offer a unique opportunity for ministry. I knew it was probably the only time in my life when I would be crammed together with so many diverse people — and I wanted to take advantage of it! I stayed until I graduated.

I believe the dorms are a strategic place to live in God’s kingdom. My dorm at the University of Illinois was composed of about 90 percent freshman — very fertile soil for planting seeds of the good news of Jesus. Most of the ministry of our Urbana chapter is centered in the dorms and private living areas. My life is radically different today because InterVarsity was there for me when I arrived on campus — even though I wasn’t looking for it.

As a freshman, I reluctantly joined the Bible study in the room next to mine. The first time I went I actually thought it was rather meaningless but the girls loved me anyway and I stayed involved, growing in my faith as the year progressed. When the Bible study exploded in conflict at the end of the year, I was shaken.

In my sophomore year I was asked to lead a Bible study. Despite my doubts and fears, I agreed. That year was exciting because we saw new people get involved that were committed to ministry and wanted to invest in God’s work on our campus.

As a junior and senior, I stayed in the dorms to coordinate the Bible studies in one of the larger sections of the dorms. Many of the new small-group leaders were as nervous as I had been to lead their Bible studies, and I reassured them that the Lord would be working through them to minister to those in their groups.

Living in the dorms was most strategic — and intense — during New Student Outreach (NSO) when we had over a thousand contact cards from freshmen and other interested students to follow up. There were six undergraduate InterVarsity chapters on the Urbana-Champaign campus and we scrambled to divide the cards for the specific ministries.

Our chapter covered most of the dorms and we wanted to give each individual a personal invitation to our first large-group meeting later in the week. That meant sorting the cards quickly by living area. As a dorm coordinator, I organized the Bible study members and encouraged them to knock on doors, extend a friendly welcome to campus and invite them to participate in InterVarsity.

This was a difficult thing to do for some of the shyer members of our team. One of my friends was extremely quiet and shy as a freshman. The next year I watched as Jesus transformed her life and she grew tremendously in self-confidence. When she agreed to be a small-group leader, she was so excited about NSO that she knew the name of everyone on her dorm floor before the week was over. The change in her still amazes me.

I believe that prayer is important to our mission in the dorms and we had a regular prayer meeting at 10:00 p.m. on Sunday nights. For a while, it was discouraging; only a small handful showed up on a regular basis. I learned that many of the students thought that it was one more obligation that they had to do — but didn’t. We kept meeting and praying with whoever came. By my senior year there were usually fifteen to twenty showing up consistently. During finals week, we faithfully planned to meet and pray as usual. Because of exams, I wasn’t expecting anyone to show up. I was shocked when twenty-three people came to pray!

As I looked around the room at this remarkable group, I realized how much God had done in each of them. It was not a sense of duty that brought them together, but the intertwined relationships they had formed with each other and with the Lord. Even in the middle of exams, they wanted to pray for the Lord to be working in their friends, their families and each other.

During my four years in the dorms, there were many times when it didn’t seem like much was happening and I was frustrated having to share my living space with freshmen who make noise until at least 2:00 a.m. But, looking back — wow! It’s been quite a journey. The Lord has been working in me and through me to be a part of building his kingdom on my campus.

Not everyone is called to spend four years in the dorms, but I believe that housing choices are an issue of discipleship. We can lay our decisions before the Lord for his guidance in where to serve him. Because I lived in the dorms, I had a front row seat watching God transform the lives of many friends. That’s an experience I will treasure the rest of my life, even when I finally have my own bathroom.