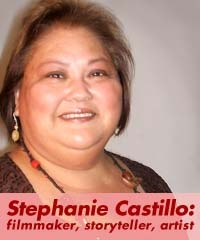 Stephanie Castillo’s artistic dream was born after she left her journalistic career and turned to her true passion — making films that tell a redemptive story. She knows the frustration of delayed dreams and unpursued passions. In God’s timing, she finally made her first documentary — and won the prestigious Emmy Award. We asked Stephanie about her art and her journey of faith as a highly-acclaimed filmmaker and storyteller.

StudentSoul.org: For years you struggled with how to make a career out of your artistic passion. What advice do you have for art students who would like to follow their passion but may be worried about money, family pressure, personal insecurity or fear?

Stephanie: It’s funny how our passions often take a detour. I believe detours can be part of God’s divine plan. That has been true in my life. One of my first jobs was at an all-news radio station, and it gave me skills for writing on deadline. My job as a newspaper reporter honed my writing skills for my first documentary. My job as a telephone solicitor gave me confidence to “cold call,” which I needed later for raising money. My work with InterVarsity’s 2100 Productions sharpened my skills to think biblically. These were my “divine detours” on the way to my passion of making films.

Here is my advice: Let yourself be mentored at a “job.” Sharpen and hone your skills at someone else’s expense. Gain your credentials. Build your reputation. None of it will be lost, if it’s in God’s hands. And you can make your parents happy, too, for their investment in your education. Assure them that you are willing to learn before you launch. Being mentored is an investment in your own future and you will have a great launch towards not only making your dreams and passions come true, but in living the creative life God has called you to.

StudentSoul.org: Your very first documentary was a huge success. What inspired you to make the film, Simple Courage: A Portrait for the Age of AIDS? Why did your film attract so much praise?

Stephanie: The film, completed in 1992, compared the leprosy epidemic in Hawaii one hundred years ago with how we were handling the AIDS epidemic. I was compelled to tell the story of Father Damien, a Belgian missionary, who went to the sick and outcast leprosy patients, as Jesus had done, and brought them dignity. Damien’s expressions of love and physical help made their living conditions at the leprosy colony better and worthy of God’s children. He wasn’t afraid of caring for them and he put himself at risk of getting their disease. I saw a lot of similarities when AIDS burst on the scene — people were afraid, just like one hundred years ago. My film asks: What have we learned from our past? Are we to repeat history and this terrible tragedy? What does Father Damien have to teach us? How can he serve as a model to be more Christ-like toward the sick and needy around us? One of my favorite lines from the film was said by the archivist at the Damien Museum in Belgium: “No one, no matter how sick or how poor, no one deserves to fall outside of the human community.”

StudentSoul.org: What did winning an Emmy Award for your first film mean to you?

Stephanie: Not what you think. Yes, I was tremendously honored by my peers. Yes, it opened many doors for me. But it was so much more than that. To me, it was a clear confirmation of God’s faithfulness and a fulfillment of his promise to me years before.

I always had a dream of making documentary films, but it took a long time for me to get into a film school — I was 30. Then, second semester, the Lord clearly asked me to leave and go home to my family in Hawaii to bring them the gospel. That was a tough one because I believed God had led me to film school, and I didn’t want to leave without finishing. But God gave me an urgent vision of my whole family standing with me before his throne. God’s promise came to me through the verse in Mark 10:28-30 that if I would follow him, I would receive more back than I ever imagined. I took that to mean “film.”

In faith and trust, I obeyed and went home and started a Bible study. Within one year, my whole family, along with their friends and relatives, became Christians — over 25 people! I never did go back to film school but finished up in journalism, taking a job for five years as a reporter in Hawaii. There came a point when I knew it was time to quit journalism and make my first documentary. When Simple Courage won the Emmy Award, it was a clear sign to me that the Lord had kept his promise that I’d receive back more than I could imagine. At that moment, I could see that he had been leading me along the right path for years.

StudentSoul.org: As a successful artist, how do you stay grounded spiritually?

Stephanie: My career has been up, up, up, but my spiritual journey hasn’t been a straight road. There have been many twists and turns, and some roads I probably shouldn’t have gone down. But God was with me, guarding and restoring me and bringing me back home like a prodigal daughter. I know this more than ever: that whatever success I had staying spiritually grounded had to do with God’s great love for me and his faithfulness. When I was with 2100 Productions, we did six manuscript studies of the Gospel of Mark that revealed so clearly our need and humanness and the power of our Lord. It still anchors me.

At one point in my life, I began to feel suffocated by Christian culture. I wanted to stop going to church and to Bible study because I felt like a hypocrite. I couldn’t tell anyone how I felt. I knew I wasn’t acting on the biblical truths that I already knew, and my heart was hardening in my failed attempts to be a “good” Christian. But I had a dialog with the Lord. I told him I felt I had to take a risk with my faith but deep down I was afraid I would lose him. I heard this answer: “Don’t worry. I will be with you. I will be in the risk. I will be at the end of the risk. I am the risk.” And so I took a risk of faith and lived honestly before him in all that I did. I dropped all of the religious stuff that felt insincere and unauthentic to me. It took some years for the Lord to bring me back. But, like he had promised, he was there at the end of my risk. He stuck with me, and eventually I got healthier and my faith became real and strong again. I am back in the Word and in his church, committed to authenticity with others and with the Lord.

StudentSoul.org: Your passion is creating documentaries that tell a true story about suffering people, yet you add a note of redemption to each one.

Stephanie: Yes, I believe our God is a God of second chances. I believe my films work for everyone, especially the unchurched, because my work isn’t preachy. I am always interested in knowing how God is working in the world, and where, and in whom. I want to know what is breaking his heart, where there is intolerance and suffering, and how I can tell stories that throw a light into these dark corners. My documentaries — nine so far — come out of real life stories that grab me, like people struck with leprosy or AIDS, or the spurned and demonized sub-culture of cock-fighters. I did several films about World War II soldiers who were Pilipino or Pilipino-American, like my father, and their struggles in America against discrimination and betrayal. I also made a documentary about war brides and their struggles of coming to America in the 1940’s. My Pilipino mother’s own sad tale was central in that film. These films are very redemptive to those who tell their stories and to those who watch them. They expose the truth and give a voice and a place in history to people whose lives are in the shadows rather than the mainstream. These people matter to God — and I can show why.

Before I begin working on my documentaries I pray, “Okay, God, where are you in this story?” He shows me where he is. He loves justice and hates injustice. Intolerance grieves him, and so I feel these stories are important to him.

StudentSoul.org: As a Christian artist, how do you use your artistic gifts to make a difference in the world?

Stephanie: I feel very blessed that God has called me to connect with stories outside the church. There are those Christian filmmakers who are called by God to speak to his people, to create films to grow his church. I believe that what I am called to do as a Christian is to make films that speak God’s heart into the marketplace, revealing it to the world. It is very challenging, and I feel very gifted to do this by the Lord. But to do this, I have to know God’s truth, his mind and his heart. My heart has to break with his, believing that God cares very deeply about these people — their tragedies and redemptions.

StudentSoul.org: Does this artistic process give you joy?

Stephanie: Oh, yes! Films have the power to change hearts and minds, to confront people or ideas or beliefs that are untruthful, intolerant or evil. That’s what I see my filmmaking doing: revealing the unknown, presenting truth through stories, history or information, and bringing these together in a way that helps people see things in a new light that can’t be ignored. Creating with such power is joyful because it’s in my hands from my Creator. To have found — and be living — my God-gift is true joy!

I think God is pleased, and that matters to me.