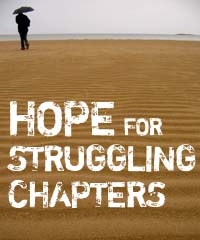 As a student, I often compared my small InterVarsity chapter with the large, strong chapters at the campuses nearby. As a member of a small chapter, the more I looked at large, “successful” chapters in my region, the more frustrated I got. At times that frustration was debilitating because it blinded me to what God was actively doing at my university.

Our chapter had about thirty members. I got involved at the tail end of my sophomore year, and by that time our ranks had decreased drastically. And by the fall of my junior year, we could count only ten people returning to the chapter. My senior year began with only five core members and no formal leadership team.

Throughout these disappointing-yet-stretching times, God gave me some encouraging insights.

Hang in there; don’t give up. God never does. (Where would any of us be if he did?) Several of our chapter members were tempted to give up on our group. The situation seemed hopeless at times. We even fell into the trap of talking about ourselves as the last people in the chapter. What a self-defeating attitude!

Don’t be afraid to try new ideas. At one point we tried combining our small- and large-group meetings into one Friday evening meeting. It was a total bust. Nevertheless, we learned some things. For example, we realized that our leadership team meetings were always spent planning the upcoming large-group meetings. We had neglected our small groups — which had suffered as a result. After some changes, we saw about twenty people get involved in three groups that met on different evenings. We changed to either a social event or a typical large-group meeting every two weeks. The two-week agenda kept our leadership team from burning out and from juggling too many details. The small groups took on the planning for many events.

Don’t rush people into leadership. One year we started with three core leaders. Two dropped off by December, and we scrambled for replacements. But pushing unprepared people into vacant leadership slots can be even more disruptive to a chapter. It might be better to wait.

Don’t jump into leadership just because you think you’re the only person left to do the job. You could end up burned out — and resenting the job, the chapter and the Lord. God’s work isn’t dependent on us. He knows the need and he knows who is (or isn’t yet) available. Let God provide.

Tell chapter members the need for help. We also don’t want to get in the way of God’s provision. Avoid the mentality that one person can do it all. Often we don’t know when or how to holler for help. Learn to be bold, blunt and clear.

Maintain a vision. It’s okay to dream big: What could the chapter eventually look like in God’s timing? What needs to be done today to aim toward that vision? Take it a day, a week, a semester at a time.

Pray. Join together simply to ask God to work. Ask another chapter to pray for you and your campus. A nearby chapter prayed for us for an entire year. We shared our concerns and found mutual encouragement in their words, “We’ve been praying for you.”