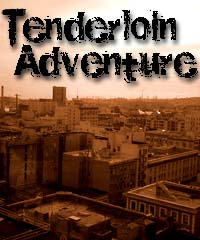 I paused mid-prayer to look at the crumpled paper that had just been tossed on our restaurant table. On it was scribbled, “There’s starting to be some talk. I may be able to help.” As the street-worn man who left the note walked away, I looked at my friends sitting there and laughed, wondering if our evening would get any more bizarre. It had all started innocently enough with parking our car in the infamous Tenderloin District of San Francisco.

The four of us, urban ministry veterans, passionate about justice, lovers of the unlovable, had been hanging out in our element — the city. Sure, we thought, we can park in the Tenderloin District of San Francisco without blinking an eye. Heck, one of our group had spent the night down there on the streets during a recent InterVarsity conference called Jesus, Justice and Poverty. Who us, worry? No way. So we went out to eat.

Full and happy following a gargantuan all-you-can-eat Brazilian barbecue, we wandered back to our car. Then I noticed that the back window of the rental had been smashed. Man, some people, I thought. Just smashing windows for no reason — how senseless is that. Apparently less senseless than I thought, because a few seconds later I realized that the bags my friends and I had left in the back seat were gone. My iPod, Palm Pilot, and expensive raincoat all flashed through my mind.

Then Josh opened the trunk.

Once full with our luggage, including his laptop, it was now empty.

This can’t be happening, I thought. We’re urban ministers!

We flagged down a passing policeman who was all-too familiar with scenes like that, and after loaning me his glove to wipe the glass out of the back, he escorted us to the station. We filled out our police report, knowing that it was an exercise in futility.

After being admonished by an officer several times to not leave things in our car when parking where we did (not to worry, officer), we headed out to look for our stuff being resold on the street.

Civic Plaza is filled with homeless men and women and drug pushers, all of whom were background scenery earlier in the evening for us. But they had become keys to a mystery as we looked for our stolen stuff. Rounding a corner, Josh saw a man putting on a pair of familiar looking shoes. “Where did you get those?” he asked. The man said that they were sold to him around the corner.

Josh charged off, and I followed, hoping that we would find our things, and hoping at the same time that we wouldn’t — what kind of confrontation would that yield?

There was no sign of our stuff, and soon a squad car arrived on routine patrol, sending most of the folks scattering. Walking back to find the man with Josh’s shoes (who was, of course, nowhere to be found), we began talking to Calvin, a homeless man. He had no information for us but he was very kind and patient, and I noticed that I barely cared that he is homeless and hungry, whereas I am full and headed to a comfortable home for the night.

Soon a dope pusher approached, asking us if we needed any weed, and upon hearing our plight, offered to go and get our stuff. All right, we thought. Now we’re getting somewhere. He liked Josh’s offer of a $100 reward but says he needed $50 of it up front. As we declined this offer, two more men approached, offering to help, and a woman also approached, saying she had info but she couldn’t tell us because she was scared to say anything. Then a young man, I’ll call him Eric, told us that his brothers stole the stuff and he could go get it for us.

He followed us into the Carl’s Junior restaurant, and said, “I can find your stuff if you will pay me the $100. I’m just trying to get cash for my heroin fix.”

But by God’s grace, sitting in Carl’s Junior waiting for our heroin-addicted friend to return, the Holy Spirit began to speak (or perhaps we began to listen). We began to see the sin in our hearts, caring more about our clothes and gadgets than the fact that Calvin had no home or that Eric was addicted to heroin. We began to see our blindness to the reality of God in this situation — could he be trying to teach us in this moment? Did we think that God was ignorant of the evening’s events? Was he more concerned with our lost stuff than with the desperation around us?

And so we prayed, repenting of our love of possessions, repenting of holding so tightly to our “stuff.” We prayed for wisdom and compassion and vision. Four urban missionaries relearning the very lessons we thought we’d mastered and that we sometimes fear students and colleagues will never learn.

Eric returned, no luck on our stuff, but his eyes were hungry and desperate. We offered to pray for him, and finally walked in the Shalom-fitted shoes that God had laid out for us that evening. We prayed for freedom from addiction and for new life, and we prayed for hope in the face of hopelessness all around. There was no magic moment when the “Amen” was said. Josh gave Eric the soda he’d just bought (“Thanks,” said Eric, sipping the drink. “You didn’t want it back did you?”) and we headed home.

I’m still disappointed at having lost my stuff. I want my clothes and gadgets and books back, but the reality is that my hope and joy and peace are not in “things.” As much as I’d like to believe that I really know that truth, our evening in the Tenderloin showed me and my friends that we are still on the journey. The next day Jen commented that she wanted to get rid of more stuff now, seeing the danger of its hold on her.

I just pray that I don’t forget Calvin and Eric and the guys selling dope, asking God to move in them and restore hope and wholeness to their lives. And I’ll keep my copy of the crumpled receipt as a reminder. Maybe one day it could be rewritten, “There’s starting to be some talk of this guy Jesus. Maybe he can help us.”