Launching a chapter at Towson University 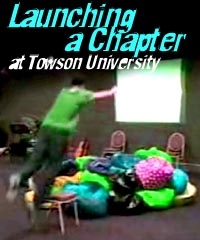 What does it take to launch a new InterVarsity group? Before their first on-campus event, students at Towson University (MD) planned the program, the music, the food and the publicity. They invited all their friends. And they collected a mountain of bean bags, but not for sitting on. Let’s just say that Towson students know how to have fun.

If you had a huge pile of bean bags in front of you, would you leap, flip, fly or dive into it? See the choices on YouTube at the Bean Bag Smackdown. But that’s not the main reason these students were together. They were launching a new InterVarsity group.

The group got started when Mark and Renee Newman, InterVarsity staff, arrived on campus last fall to meet students and start a group. Their first impressions were very positive. “Right away, we really liked Towson students,” said Mark. “They’re fun, engaging and easy to talk with. We’ve found a ton of spiritual openness, even in surprising places. Students here just naturally invite friends along in whatever they’re doing.”

Mark and Renee started hosting dinners for interested students every other week at their apartment. This developed a strong sense of community in the newly-forming group. “There’s just something about gathering to break bread and share life together,” Mark adds. During the second semester, the core group met weekly for dinner with a time of worship and prayer added to the evening. As the group has grown, friends from their church have sponsored the dinners and prepared the food.

Pamela Breckenridge first came through an invitation from her roommate. “God was really stirring up my soul those first few months of joining InterVarsity,” she said. “Coming from a Catholic background, I was worried at first. But I realized that this is where God wanted me and that this is the community I had been internally searching for. That realization only grows stronger and deeper as time goes by.” Read more of Pamela’s story.

Freshman Betsy Raine got involved because of the people. “We have fun playing games, hanging out, or watching movies, but we also support each other in our spiritual growth. I don’t feel judged by the people in the group — only more encouraged.” She has found some close friends through the group that have become good accountability partners.

During the year, three dorm Bible studies have developed a lot of momentum. They are a primary place where students are encountering Jesus. “Students are experiencing a different kind of community, and they’re coming away transformed,” says Mark. He got an email from one woman after her first Bible study, thanking him for being on campus. Since taking part in the group, she felt a strong connection to God and was starting to understand what it means to build a relationship with him.

By February the fledgling group was ready to launch their first on-campus event (YouTube video). They had three planning meetings to establish the vision and hammer out details. “All year we’ve been talking about being people God sends out to influence others at Towson,” said Mark, “and the students were actively involved in pulling off this event.” They bought Facebook fliers, put up posters on campus, made food, set up the room, played instruments and led worship, collected bean bags, made a video, and shared about what God has been teaching them.

Most of all, they liberally invited many of their friends, and focused on meeting and welcoming new people to the group. Some even left the meeting room and went out into the student union to invite random people to help eat all the food that had been prepared.

It was a big event for a small number to plan and carry out. Betsy helped plan the first large-group meeting and made the videos, and she saw God working through the event. “It bonded those of us in the fellowship already and brought awesome new people into the fellowship,” she said. “Everyone was so welcoming and inviting to the new faces. Personal invitations were a huge part of the success of the event.”

Pamela’s main role for the chapter launch was to be an “invitation,” and she prayed for opportunities to invite people. “God’s work was beyond evident, not only that night, but from the very beginning,” she said, as she remembers the group’s preparation, the doubts and concerns, and the excitement. “The Lord transformed and renewed those present that first night, including myself.”

Growth in the Lord

Betsy has grown a lot in her faith this year through Bible studies, conferences and the large-group meetings. “I’m learning that faith is not about rules and regulations, but about a personal relationship with Jesus Christ,” she says. “He meets us where we are and wants to walk us through the struggles in life. He is at work and invites us to come along and walk with others through their journey.”

This year Pamela has learned a lot about the Lord and how he wants to use her on campus. “I learned that I can witness and influence others by listening — listening with care and love,” she reflects. She always thought that influence had to be voiced to have a real affect on people. She adds, “Now I am realizing that God is pushing me and urging me to influence others at Towson University through kind acts of love, done with sincerity, and by listening to his children.”

What is the best thing about InterVarsity at Towson? “Its mission,” declares Pamela. “Even though we’re a new group, we know that our purpose as children of God is to spread His word and lead others to him. That, to me, is amazing.”

Note: Not all videos linked to on this site are created by or hosted (stored or served) by InterVarsity Christian Fellowship/USA. InterVarsity is not responsible for the content of such videos, and any copyrighted content in such videos is the property of the copyright holder.