What is a true friend? 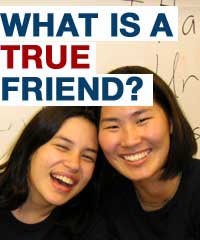 You may have many friends, or only a few. Some are only acquaintances, not true friends. A friend is someone you can hang out with, have fun with and depend on. The Bible has a lot to say about friendship, but it’s different from what you might expect.

Joe O’Day, author of The Art of Friendship, writes, “Our preoccupation is usually with having friends. The Bible’s focus is on being a friend.”

O’Day goes on to tell about King David’s friendship with Jonathan. He concludes, “Another person who went the distance for his friend was Jonathan. His friendship with David is one of the most outstanding and moving stories in all of Scripture, perhaps in all of literature… . Few are the people blessed enough to know a committed friendship such as Jonathan’s. David calls Jonathan his brother, reminiscent of the verses from Proverbs. Jonathan was closer to David than a brother. He was closer than a wife. Such analogies speak deeply of commitment, for the fundamental bond between brother and brother, or husband and wife, is commitment. Commitment is the word that unlocks the real meaning of friendship.” You can read about David and Jonathan starting in 1 Samuel 19 and on into chapter 20. Reading this will introduce you to the potential of deep, caring friendship.

Paul Grant grew up in Switzerland where the term “friend” is held in such high regard that most people only call a few people their friends. He points out that the idea of “friend” in Switzerland and “friend” on Facebook are miles apart.

“On Facebook,” says Paul, “the term ‘friend’ is a technical term, really a ‘contact.’ You have the right to send your friends a message, but the use is hardly relational. Of course a friend is more suggestive and appealing than a contact. Some people boast about the number of ‘friends’ they have, even if they don’t have personal relationship with them.”

In the U.S., says Paul, we tend to confuse friends and acquaintances. “We find it cold to say ‘acquaintance’ or ‘colleague’ or even ‘comrade,’ which we associate with communism. People in other parts of the world don’t hesitate to differentiate those they merely know and those they’d count as friends.”

A true friend is …

“What is a friend? A single soul in two bodies.” — Aristotle

You can have a lot of acquaintances, but only a few people will become your best friends. These are kindred spirits, much like David and Jonathan, whose souls were “knit together.” Friendships like this will endure, even though the intensity of the friendship will ebb and flow over time.

One of the dangers in this kind of friendship is co-dependency. The sheer delight of having such a friend can also create weighty expectations in the relationship. A good question for friends to ask regularly is, “Are we truly seeking the other person’s highest good?”

“A true friend stabs you in the front.” — Oscar Wilde

Leave it to Oscar Wilde to lay out an important truth with such wry humor. A true friend is one who helps you see the truth, even if it hurts. This doesn’t mean we can go around stabbing our friends with hurtful words. Rather, it means being up front with friends about important issues, raising gentle questions with tact and love, never gossiping or putting them down to others behind their backs.

“I do not wish to treat friendships daintily, but with the roughest courage. When they are real, they are not glass threads or frost-work, but the solidest thing we know.” — Ralph Waldo Emerson

Real friendships don’t just happen, and they aren’t maintenance free. Ask yourself and your friend questions like these:

Seeking another person’s highest good: that’s being a true friend.

Read more about Recapturing the Definition of Friend.