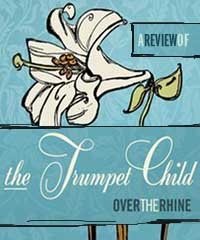 One would think that a band with 16 albums under its belt, having experienced a split and the collapse of their label, would be in the twilight of their career, if not completely irrelevant. Not so with Over the Rhine. This week they released their seventeenth CD, The Trumpet Child.

Cincinnati-based Over the Rhine is primarily the husband/wife team of Linford Detweiler and Karin Bergquist, along with a changing cast of supporting players. The group has a reputation for thoughtful, dense lyrics and varying music styles ranging from folk and rock to country and even electronica. Although The Trumpet Child is not their heaviest thematic work, it’s arguably their best and most satisfying to date.

The disc starts out with a musical nod to the early twentieth century hymn “What a friend we have in Jesus,” Bergquist delivering the line, “But I don’t want to waste the words/that you don’t seem to need/When it comes to wanting what’s real/There’s no such thing as greed/I hope this night puts down deep roots/I hope we plant a seed” with such finesse and beauty that it would put Norah Jones to shame.

Another strong vocal track is “I’m on a Roll.” It’s a bouncy, upbeat track with rhythm that begs for a summer afternoon and a set of car speakers to play it through. It’s also a stretch for Bergquist who delivers a very catchy pop song with infectious enjoyment: “I’m on a roll/Just like I oughta/I’m on a roll/I can’t be bothered/I’m on a roll/I want the whole enchilada.”

It’s at this point the more thoughtful side of the writing begins to emerge with “Nothing is Innocent” and the jazzy title track, which contemplates the idea of a horn ushering in Christ’s return. What’s striking about Over the Rhine lyrically is that when faith becomes the focus, it always results in an incredibly powerful song. The strongest moment on the album, in fact, is at the end of “The Trumpet Child,” which musically builds to “the trumpet child will lift a glass/His bride now leaning in at last/His final aim to fill with joy/the earth that man all but destroyed.” It’s an amazing moment in that the music and lyrics come together eloquently to paint a powerful picture of God setting up his Kingdom.

The themes of the band’s last four or five releases have been mostly built around relationships. Their writing has been a cathartic outlet for working through marital troubles. Drunkard’s Prayer could have been torn from the pages of their journals while they went through marriage counseling. The resolve they have to love each other well makes for a valuable listening experience. “Let’s Spend The Day In Bed” is another highlight that speaks to this notion. Accompanied by Matt Slocum from Sixpence None the Richer, it’s hard to miss the affection that the couple has for each other, and Matt’s playing propels the song to terrific heights.

Finally, it would be wrong not to mention “Don’t Wait For Tom,” which pays homage to Tom Waits and is sung by Linford Detweiler. It’s impossible to pick a favorite lyric from the song because it’s so tightly constructed and borrows heavily from Waits’s own writing. Detweiler’s singing is reminiscent of Waits, and this marks his second lyrical contribution to Over the Rhine’s catalog. The first, “Jack’s Valentine,” remains a crowd favorite and this song will likely be as well.

If you’re an Over the Rhine fan, this will likely be one of your favorite releases, and for others it will be an excellent introduction to Over the Rhine’s large catalog. There are no real misses on the CD, but if you’re wanting to try it out, “I Don’t Want To Waste Your Time,” “I’m On a Roll,” “The Trumpet Child” and “Don’t Wait For Tom” would be excellent choices for tracks to grab on iTunes. The entire album is available for streaming from www.overtherhine.com for a limited time.