The redemptive power of the arts: Two films 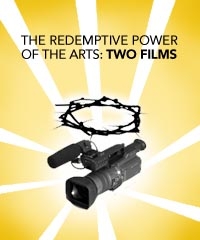 Films that explore the redemptive power of the arts are worth watching with your friends. We recommend two films in particular: War Dance and Shakespeare Behind Bars. Here are two thoughtful reviews that highlight these documentaries.

Sadly, the arts are often dismissed in our society — at best entertaining, at worst a frivolous waste of time. When there’s a budget crunch, music and art are the first to go from the public schools. Churches sometimes view dance or drama with a jaundiced eye. Yet the arts, particularly the performing arts, are a gift from God that can be used to transform broken lives and bring healing to hurting souls.

The movie, War Dance, is a testament to the power of the arts to bring healing, even to children whose lives have been all but destroyed. It is a documentary about elementary school students in ravaged northern Uganda who travel to the capital to represent their tribe in a national cultural arts competition. It’s an inspiring story that reflects the determination of the students and teachers to bring honor to the Acholi tribe in the face of seemingly insurmountable obstacles, like their confinement to a refugee camp, or besieged by the Lord’s Resistance Army. Shannon Whiting of urbana.org has written a stirring review of this sobering, joyous film.

Another review worth reading is by Ken Fox of tvguide.com who highlights Shakespeare Behind Bars, one of the greatest documentaries of recent years. The film is about Curt Tofteland who has been volunteering at Luther Luckett Correctional Facility in Kentucky since the mid-1990’s, directing inmates in productions of Shakespeare. The story follows these men as they struggle to stage The Tempest, a particularly appropriate play for men who have been isolated from friends, family and society. A film of insight and compassion, Shakespeare Behind Bars does not whitewash the histories of these men — their crimes, when revealed, sometimes come as a cold slap to the viewer — but it does suggest that the arts have the power to bring hope and the possibility of redemption.