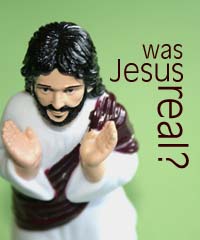 You’ve probably heard (or offered) the objection that little can really be known concerning the life of Jesus, or that he certainly wasn’t who others described him to be — a common claim by those who question the accuracy or authority of the New Testament. So, was Jesus who he or others say he was? To respond to this Good Question, we turned to an article by Dr. Gary Habermas, Distinguished Professor and Chair of the department of philosophy and theology at Liberty University.

What follows is a brief article by Dr. Habermas that addresses this question.

The Jesus Christ of History

There are more than 20 ancient, non-Christian witnesses to various aspects of the public career of Jesus. Most of these consist of writings from the first to the mid-second century; a few are archaelogical finds. Together they reveal an enormous amount of information.

This is not to say that the New Testament alone is not a trustworthy source of information about Jesus. As a literary document, it provides better material than any other ancient classical writing. The New Testament has far more manuscript portions than other ancient texts, and the copies have proven much closer to the originals in both accuracy and date. In addition, no portions of the New Testament books are missing, while large amounts have been lost from other classical works. (Roman historians have especially suffered: about 75 percent of Livy’s and about 50 percent of Tacitus’s histories have disappeared.)

Still, the skeptics around you might be interested to know that at least 17 ancient written sources, representing a variety of persons and circumstances, confirm and complement biblical accounts of Jesus’ life. Here are some of those sources:

Ancient historians. The Roman historian Tacitus (as well as his contemporary Suetonius) provides significant information about Jesus and his followers. Writing around A.D. 115, Tacitus notes that Christ was killed at the hand of Pontius Pilate while Tiberius was emperor; that Christ’s teachings had already spread to Rome; and that Christians were considered criminals and tortured in a variety of ways, including crucifixion (Annals 15:44). In addition, a disputed passage by the Jewish historian Josephus tells of Jesus’ virtuous conduct, his choosing of disciples, his crucifixion and death under Pilate, and the disciples’ reported appearances of the risen Jesus three days later (Antiquities 18:3). Yet another historian, Thallus, relates a very early (ca. A.D. 52) report of the crucifixion, attributing the darkness which occurred at Jesus’ death to an eclipse of the sun.

Ancient politicians and social commentators. Roman government officials such as Pliny the Younger and even two Caesars, Trajan and Hadrian, wrote intriguing letters mentioning Jesus and early Christian origins. Pliny, for example, writing about A.D. 112, describes weekly gatherings of early Christians (of all ages and social classes) who met before dawn, singing and worshipping Christ as Deity, and agreeing not to sin. Pliny, who required Christians be killed unless they denied Christ and worshiped the gods and emperor, asserts that true believers would not recant (Letters X:96).

Other Gentile evaluations of Jesus and the early church were written by Greek satirist Lucian of Samosata and a Syrian named Mara Bar-Serapion. Lucian wrote that Jesus taught the brotherhood of believers to deny other gods and to obey his laws. Christians, we are told, did not fear death because they were persuaded of their immortality: furthermore, they shared material possessions and frequently read from Scripture (The Death of Peregrine 11–13).

Non-Christian religious sources. The Talmud (an authoritative body of Jewish tradition), the Toledoth Jesu and several gnostic writings also offer relevant details about Jesus. One of the most interesting reports from this religious literature is the earliest reference to Jesus in the Talmud (Sanhedrin 43a), which states that Jesus was “hanged” (compare Galatians 3:13 and Luke 23:39) on Passover eve after the Jews were going to stone him for sorcery and for leading Israel astray. The account adds that anyone who wished to defend Jesus could have done so, but no one volunteered.

Archaeological sources. Recent digs have provided key background information. One inscription, for example, indicates that a Judean census occurred during the reign of Emperor Augustus (23 B.C. – A.D. 14), lending credibility to Luke’s story of the Roman taxation which brought Joseph and Mary to Bethlehem. Other relevant finds include the skeleton of Yohanan, a first century crucifixion victim, which reveals the basic technique of such capital punishment, and the Nazareth Decree, a stone which gives details of Jewish burial. Both back up details of Jesus’ crucifixion and burial mentioned in the Gospels.

In total, about one-third of these non-Christian sources date from the first century; a majority originate no later than the mid-second century. Noted historians such as Michael Grant and A. N. Sherwin-White explain that, compared to many ancient writings, these dates are quite early and close to the events themselves. Furthermore, these sources do not depend on the New Testament for their data. Numerous facts reported by Pliny, Lucian, the Talmud and others are recorded nowhere in the Gospels.

But, some might ask, “Don’t these ancient sources, unlike the New Testament, teach a non-supernatural Jesus?” Surprisingly, seven relate the belief in the deity of Jesus, and ten either state or imply his resurrection.

From all of these non-Christian, archaeological and Christian sources (as well as oral traditions later recorded in the New Testament), we can glean well over 100 different details concerning the life, teachings, death and even the resurrection of Jesus. Almost every major facet of his ministry reported in the Gospels is recorded. The claim that we cannot know the historical Jesus is not true. Jesus’ life is one of the most substantiated in ancient history.

—Dr. Gary R. Habermas, Distinguished Professor and Chair of the Department of Philosophy and Theology at Liberty University. This article first appeared in Student Leadership journal.

You can read more articles by Dr. Habermas at his website.

InterVarsity Press offers several books about the identity of Jesus, including:
Misquoting Truth: A Guide to the Fallacies of Bart Ehrman’s Misquoting Jesus by Timothy Paul Jones

Fabricating Jesus: How Modern Scholars Distort the Gospels by Craig A. Evans.

Tags:
Reaching Out
Thinking through Faith