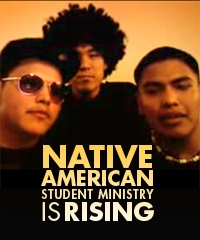 What does following Jesus during college look like for Native American students? That’s the question Mark Charles, a Navajo, is asking. A graduate of UCLA, Mark has a big vision for God’s transforming power in students who follow Jesus. Native students are experiencing this transformation, integrating their faith and heritage in community with one another — and making a difference on their campuses.

When Mark was a student at UCLA, his involvement in the InterVarsity group changed him. He caught the vision for how students who love God can have a transforming impact on other students. At a recent conference in New Mexico, he candidly talked with students from five campuses about what it looks like to follow Jesus as a Native college student.

Mark shared the speaker platform with his father, Ted Charles, who is a pastor and a Navajo elder. Together they opened up the Scriptures to portray Jesus’ ministry of truth and grace. Students connected with God and each other and enlarged their vision for the impact they could have when they returned to their schools.

InterVarsity’s ministry with Native students has been active for years, primarily through the work of staff Tony Begay and Celeste Handy in the southwest. Four years ago, a renewal in the work began with InterVarsity staffer Megan Krischke. She has a Native American heritage but didn’t embrace it until God clearly called her to step forward as a leader in ministry to Native students. Megan’s obedient journey has resulted in an expanded ministry among Native students in Arizona, New Mexico and Colorado. “We’re charting new territory, but God is working among Native students,” Megan said.

“At first, we didn’t know what we were doing,” admits Megan, who moved with her husband, Willie, to start a Native InterVarsity chapter at Fort Lewis College in Durango, Colorado. But God has been faithful. Today InterVarsity has established Native American chapters on five campuses. Megan supervises the “Four Corners” area staff team, InterVarsity’s first area created for an ethnic-specific ministry.

The InterVarsity groups are safe places for students to explore ways to integrate their Native cultures and their faith. “I’m learning how to balance my traditional ways with my Christian beliefs,” said Heather, a Whiteriver Apache. “I’m learning how to stand up for myself as a Native person, even when other Christians don’t feel comfortable bringing culture into their faith.”

Last summer, Heather and a few other Native students attended Ho’olohe Pono, a Christian gathering of Native Hawaiians in O’ahu. “I liked learning about Hawaiian culture because it helped me realize the importance of culture, history and the past,” said Angie, a Whiteriver Apache. “My mom taught me about combining my Christian ways with my traditional ways, but in Hawaii, it is visible and better understood.”

After the gathering, Stacy, a Navajo student a UNM-Gallup, said that she wanted to bring back to her home community “a love for God, the land and the people.” Now, she is eager to learn more about her culture and be a better listener to her tribal elders.

The new Native chapter at Northern Arizona University has been particularly fruitful. In 2006, Jessica Grahmann, InterVarsity staff in Wisconsin, moved to Flagstaff, Arizona to start a Native chapter at NAU. “I had a strong sense of God’s calling,” Jessica said, “and I spent the first year just praying for the students, the campus and open doors.”

Her prayers were answered. During that year she met a few people from several different ministries who shared her vision to create a fellowship for Native students on the NAU campus. The team of four people, including a Navajo woman and a Korean couple, launched the new chapter, called OneTribe, in the fall of 2007. By the end of the semester, twenty-two students were attending a weekly Bible study, mostly men.

“When I first walked in to OneTribe I wasn’t sure about it, but people greeted us right away, and they had a love for God that you could see,” said Trevor, a San Carlos Apache. “Your first year as a freshman, you’ve got to find the right people to hang with, and I found that in OneTribe,” he added.

Last January, three young men made public decisions to start following Jesus. “Their conversions were a powerful, communal experience,” observed Jessica. “When students saw how God was radically changing the lives of their friends, suddenly God became real. As these young Native men talked about their transformation, other students began to believe that if God can change these friends, there is hope for their lives, too.”

OneTribe has a passion for prayer and outreach. At the first meeting in the fall, the leaders showed a hilarious video describing OneTribe and what the group offers new students. They actively reached out to freshman Native students, building trust and friendship through a scavenger hunt on campus, a basketball tournament, and a bowling night. When the group nearly doubled to 35-45 students, they had to get a bigger room for their weekly meetings.

The large-group meetings start with worship, prayer, announcements and student testimonies. Then the men and women split up into small groups for Bible studies or seeker discussion groups. Three Navajo students from the nearby Indian Bible College help lead the men’s Bible studies.

An important building block in Native ministry took place last April when a group of students and staff met for the annual Native Student Gathering in Gallup, New Mexico. The theme was “Prayer, Freedom and Forgiveness.” The speaker was Tulley Lee, a Navajo pastor who used stories about his grandmother and growing up on the reservation (“the rez”) to connect with students.

“He is all rezed out!” said one student of Pastor Tulley, using a euphemism for knowing about life on the reservation. Pastor Tulley spoke personally and honestly about forgiveness, naming the excuses a person might use for not forgiving. His down-to-earth stories — and graying hair — won him respect from Native students who value the wisdom of the elders.

The most poignant moment of the conference came when one student shared her personal testimony about God’s forgiveness — and about forgiving herself — during a crisis in her life and the bad choices she had made. Her personal story of repentance, forgiveness and freedom powerfully demonstrated God’s grace and healing to those who heard it.

Cultivating Native forms of worship is gaining ground in many of the fellowship groups. Singing Native Hawaiian songs or “Amazing Grace” in a Navajo translation is a bridge that helps students see that Native ways of worshiping God are valuable and beautiful. Some of the chapters have slowly introduced the use of drums as a natural form of Native worship, even though many in the Native community believe that traditional-style drums should not be used to worship Jesus.

Because of strongly-held differences of opinion, Megan is very careful about how she introduces Native forms of worship. “We’ve had all of our drums blessed by a Christian Navajo elder and we always explain that the drums are dedicated to worshipping only Jesus,” Megan states. “We look for a variety of ways we can weave together Christian worship and Native culture, not just by using drums. But on our campus at Fort Lewis College, the pow wow drum is the students’ favorite part of worship.”

For these Native students, worshiping the Lord is just the beginning. They are growing in their vision for how their community on campus can be a place for their brothers and sisters to be accepted, loved and transformed by the Lord. Together, they are living as God’s redeemed people, inviting other Native students to join in the grand quest of following Jesus.